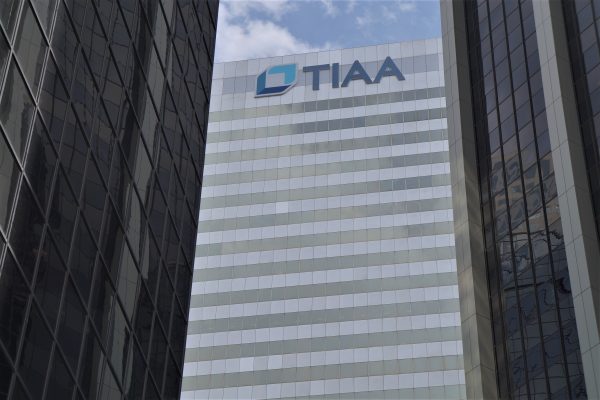 The upper floors of 1670 Broadway, as seen from the corner of 16th Street and Cleveland Place. (Thomas Gounley)

The 36-story office tower at 1670 Broadway was bought for $238 million. HFI 1670 Bdwy LLC purchased the building from UBS Realty Investors on Aug. 16, according to county records. The sale was recorded Monday.

CBRE’s Mike Winn, Tim Richey, Chad Flynn and Jenny Knowlton marketed the tower, according to the Colorado Real Estate Journal. Richey did not respond to a request for comment Tuesday.

The building is topped by signage for financial services firm TIAA. Other tenants include P2 Energy Solutions and TransMontaigne Partners LP, both of which operate in oil and gas, and the U.S. Department of Urban Housing and Development. UMB Bank and Starbucks operate on the ground floor.

Other recent deals in the core of downtown include the $67 million sale of the 30-story office building at 1660 Lincoln St. in mid-March, and a partial sale later that month that valued the 54-story office tower at 1801 California St. at $560 million.

The upper floors of 1670 Broadway, as seen from the corner of 16th Street and Cleveland Place. (Thomas Gounley)