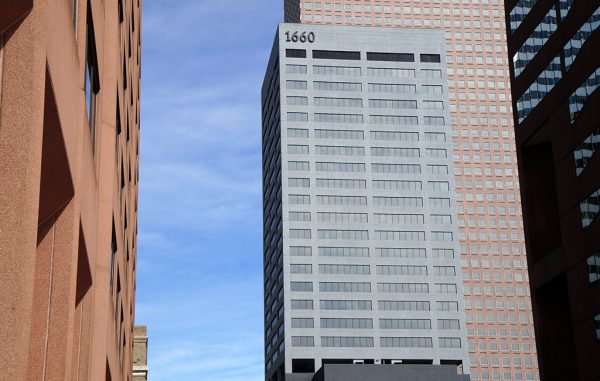 The 30-story office tower at 1660 Lincoln St. at the east end of downtown has sold for $67.2 million, up 75 percent from the last time it changed hands five years ago.

The sale also included the 1655 Sherman St. parcel, which houses the ramp that leads into the building’s parking garage. California-based ACORE Capital provided financing for the deal.

Westport did not respond to a request for comment.

Unico purchased the building in May 2013 for $38 million, according to property records. Spokeswoman Nikki Pinney said in an email that the company spent $17 million on renovations, “with projects ranging from the installation of an all-new central plant and HVAC systems to the construction of a sky-lit new lobby and entryway.”

The tower, completed in 1981, has 284,000 square feet of space, according to Unico’s website. Tenants include Trinity Petroleum Management, law firm Hunnicutt & Appelman and software company Levels Beyond.

Unico owns seven buildings in the Central Business District and LoDo, including 518 17th St., 1675 Larimer St. and 1875 Lawrence St., according to its website.

The renovated office building on Lincoln Street sold for 75 percent more than the last time it changed hands five years ago.