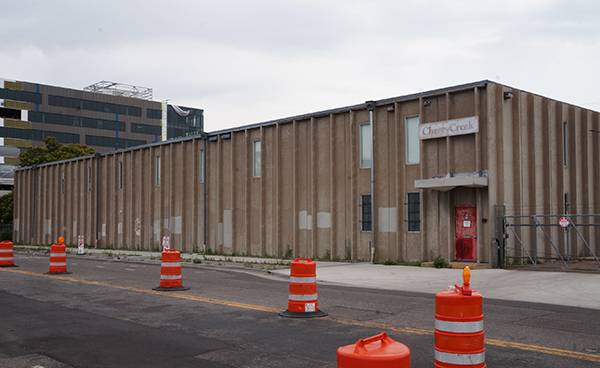 Houston-based Hines is under contract to buy 3500 Blake St. in Denver, which is currently home to an industrial building. Photo by Thomas Gounley.

Fresh off completing a downtown skyscraper, developer Hines is planning to build in a new part of Denver.

The Houston-based company behind the 40-story 1144 Fifteenth is under contract to purchase 3500 Blake St. in RiNo, according to the property owner.

Hines, which did not respond to requests for comment, plans to build its mass timber T3 office concept at the site, according to sources.

Hines’ inaugural T3 — the name stands for timber, technology and transit — was built in Minneapolis. The seven-story, 221,000-square-foot structure, whose tenants include Amazon, was completed in 2016; Hines sold the building in May.

Hines has announced plans to build T3 buildings in Atlanta and Chicago.

The RiNo building would replace a 15,000-square-foot structure on the 1.15-acre lot. The building is used by glass sink manufacturer Vitraform. Jerry Fein, who owns Vitraform with his wife Sheila, said he purchased the property in 1986.

Fein said he put his Blake Street property on the market three years ago, well aware that the warehouse district was being transformed.

The lot is across the street from the under-construction mixed-use development The Hub. That 2.5-acre site sold for $9.6 million in October 2015, then changed hands again in March 2017 for $19.37 million.

Fein said selling his property has been more complicated than he expected.

“This is our third time at bat with this thing,” he said. “We’ve had two other buyers that fell through. This one seems more likely to happen.”

Fein said burrito chain Chipotle had the property under contract for a new headquarters. The chain ultimately opted to lease space in 1144 Fifteenth rather than build its own campus at the RiNo site. Chipotle changed plans again earlier this year, announcing it would move its headquarters to California.

Vitraform was founded in 1976, and has 12 employees. The company sells high-end sinks in the United States and overseas. Locally, it produced 800 sinks for the Four Seasons tower, which was completed in 2010.

Fein said his contract with Hines lets Vitraform stay at 3500 Blake for six months after closing. He said he hopes to purchase another similarly sized site for the company as part of a 1031 exchange, but doesn’t know where that will be.

Fein said the deal with Hines and its partner McCaffery is expected to close in October.

Drew McManus with Cushman & Wakefield is the listing broker. Phil Ruschmeyer of Ruschmeyer Corp. represented Hines when it purchased land for 1144 Fifteenth. He would not confirm the RiNo deal.

Hines is new to RiNo. The Central Business District accounts for the bulk of the company’s Denver portfolio, although Hines also has developed residential projects in Sloan’s Lake and the Denver Tech Center.

McCaffery has developed a range of office, residential, mixed-use and hotel projects. The company has an office on 17th Street in Denver, although its online portfolio does not show any properties in the city.

Houston-based Hines is under contract to buy 3500 Blake St. in Denver, which is currently home to an industrial building. Photo by Thomas Gounley.

“I’ve got to cash in at some point,” said the property owner, who has had it since the 1980s and said he has a contract to sell the land to Houston-based Hines.