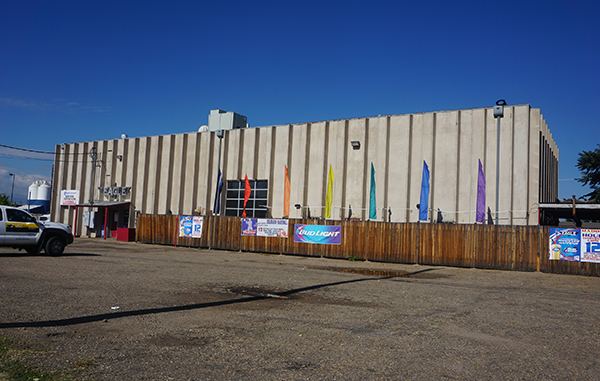 The Denver Eagle bar and some office buildings sit on a site recently sold to developers. Photos by Burl Rolett.

With a $10 million land deal closed, a Denver developer is firing up another major RiNo project.

Elevation Development Group bought 2.5 acres near Downing and Blake streets last month for $9.6 million. Principal Brent Farber declined to comment on specifics but said the company plans to break ground on a significant mixed-use development in 2016.

“There’s a big story happening in RiNo right now, there’s a lot going on in the area,” he said. “One thing I loved about this specific site is it’s right on the light rail stop – it’s just right off of the platform.”

WalBlake LLC and Eagle Leather LLC were the sellers in two separate land transactions. Both of those entities are managed by EXDO Event Center co-owner Andrew Feinstein. Feinstein referred questions on the deal to Farber when reached by phone on Wednesday.

WalBlake LLC owned the bulk of the land, selling five parcels and about 1.9 acres for $7.74 million. The firm bought that land for $3.38 million in November 2012, city records show. That translates to a 129 percent return for the 3-year hold, or nearly 32 percent compounded annually.

Elevation Development Group already has one major project underway in Capitol Hill, where the company is building the 64-unit Moto Apartment building at Eighth Avenue and Sherman Street. Elevation also co-developed the 16M condo and office building in LoDo.

The Denver Eagle bar and some office buildings sit on a site recently sold to developers. Photos by Burl Rolett.

So whats going to happen to the eagle? I can’t see an apartment complex next to the eagle. Will they get a new building or are they just shutting it down? It would be a bad year for gay culture in Denver, should we loose the eagle b/c of a development deal given that we are already using both crypts on Broadway.