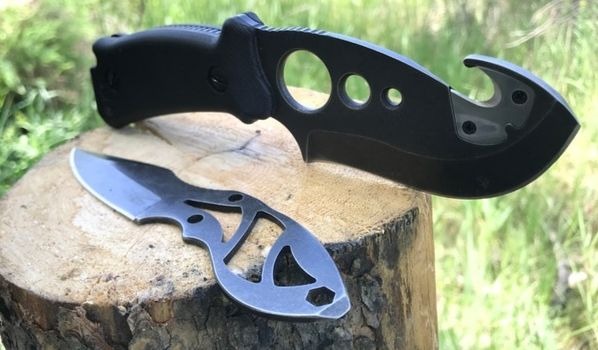 Now he’s looking to cut even deeper into the outdoor industry with his newest products, a pair of hunting and survival knives that also can spark a fire.

Mojica raised more than $100,000 in Kickstarter sales for his fire-lighting carabiner in 2016. 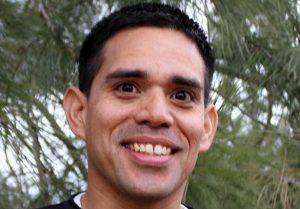 He’s trying his hand at Kickstarter again for his knives, looking for $48,000 in sales.

“That pays for tooling,” Mojica said. “It pays for the first round of production,” which he said will be 500 knives.

Mojica decided to try knife design after a hunter friend brought out 16 knives and told Mojica to make a better one. The bigger of the two knives, the Phoenix Talon, comes with Outdoor Element’s signature fire-starting spark wheel and a removable handle that reveals a pocket for storing small survival items. Mojica designed the knife’s hilt to serve as a makeshift hammer, and the curved blade on the larger knife comes with a hook on the tip that can cut through tough materials and ergonomic finger holes for a better grip when field dressing.

“It can hold an edge but it’s not stupid hard that it’s brittle and won’t take three weeks to sharpen,” Mojica said.

Mojica plans to sell the knives — which are manufactured in China — as a dual set for $150.

But knives are a different animal on Kickstarter.

“I didn’t realize Google, Facebook and Instagram have policies if it’s a weapon. You can’t place ads,” said Mojica, 41. “It’s definitely been hard just to get the word out.”

Mojica started working full time on his outdoor startup last year. He said he did $268,000 in revenue in 2017.

He’s sold about 10,000 units of his first product, a survival bracelet with fishing line and a hook, and a fire starter, and 80,000 units of the Firebiner. He’s distributing his Outdoor Element products in 700 Ace Hardware shops and 250 mom-and-pop outdoor retailers.

After releasing his knives, Mojica will return to carabiners and plans to release two separate designs later this year.

Thanks for the interview!
In case anyone was looking for it, here is the link to the Kickstarter campaign:
https://www.kickstarter.com/projects/529624630/phoenix-hunting-survival-knife-set/posts/2242229