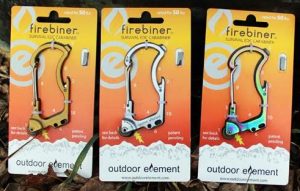 The Firebiner is a carabiner with a spark wheel, small blade, bottle opener and screwdriver. (Courtesy Mike Mojica)

Mike Mojica has one more month working as an aerospace engineer before he sets out on a new trajectory as an entrepreneur in the outdoor recreation industry.

Somewhere on the other side of the world, his first run of 15,000 Firebiners – a Swiss Army Knife-like carabiner combination – is being produced in China and getting shipped stateside.

For Mojica, it was not enough that a carabiner could hold his keys or snap onto his backpack. He wanted to create something that could light a fire, open a beer and cut fishing line.

“My daughter is 6, and she couldn’t generate fire from flint and steel,” Mojica said. “The idea of the Firebiner came up … For me, it’s complete fun.”

Mojica’s company, Outdoor Element, launched five years ago with one product, its Kodiak survival bracelet, which also can spark fires and includes fishing line and a fishing hook.

Mojica estimates the product will be available for purchase online by mid-May.

The Firebiner is made from stainless steel with a titanium coating, weighing in at 1 ounce. At the bottom, a wheel creates sparks when flicked quickly. A small blade cuts fishing line or small cords. And the carabiner also has a bottle opener and a screwdriver. 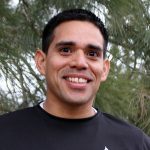 Although not designed for climbing, Mojica said he chose to add the extras to a carabiner because he noticed how popular the tool was among outdoor enthusiasts.

“It’s that third hand you can always rely on,” Mojica said. “It (complements) the outdoors and yet can be used in all aspects of life.”

Mojica declined to comment on how much each Firebiner costs to manufacture, but said the manufacturer’s suggested retail price was $15.

The Centennial resident tested interest in fall 2016 with a Kickstarter campaign that aimed to raise $15,000, but landed $109,000. Mojica then moved the project from Kickstarter to Indiegogo, where customers could pre-order the Firebiner for $12. In total, the project garnered $127,500 between both crowdfunding platforms.

Mojica said the Firebiner will be available on Outdoor Element’s website and Amazon to start, and hopes to get it into retails stores like REI.

“We definitely want to grow quickly and develop this outdoor element business model,” Mojica said. “We need to prove ourselves.”

The entrepreneur said he’s planning a second order of Firebiners immediately after his first product run. And now that he’s going full-time, he’s tinkering with other outdoor products, including a more affordable sleeping bag option.

Mojica said he’s sacrificing on the weight of his bags, making them heavier and more ideal for the car camper or weekend backpacker. 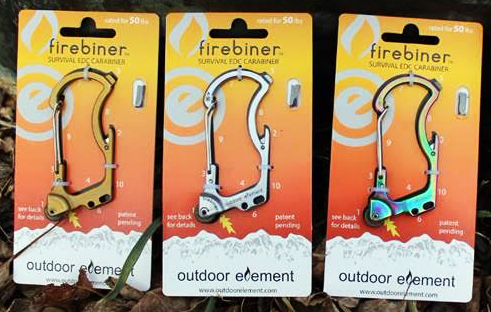 The Firebiner is a carabiner with a spark wheel, small blade, bottle opener and screwdriver. (Courtesy Mike Mojica)

After successful crowdfunding campaigns, a mechanical engineer from Centennial is launching his first run of 15,000 Firebiners – a Swiss Army Knife-carabiner combination.