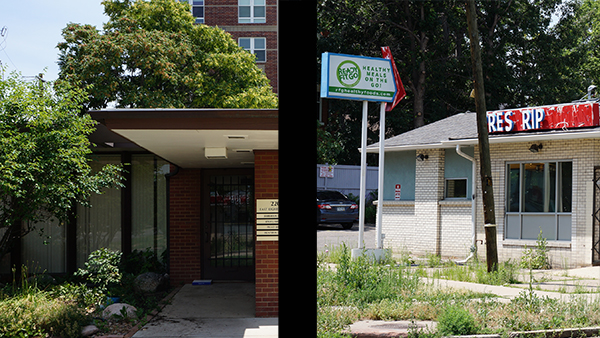 An intersection a block west of City Park is likely to get a new look in the near future.

The 0.22-acre site is currently home to a single-story medical office building. The 2,667-square-foot structure dates to 1950, according to city records. Dermatologist practice Denver Skin Clinic once operated in the space, but has since moved to Cherry Creek.

Generation, led by managing partner Chris Lonigro, is proposing to demolish the existing structure and erect a 38,814-square-foot building. It would have commercial space on the ground floor, and 24 residential units on the upper three floors. The second floor would be devoted to parking; the project would have a total of 19 spaces.

The 0.22-acre lot is currently owned by Lewnel LLC, according to records. Lonigro did not respond to a request for comment.

A site plan has also been submitted to the city for 2190 E. 18th Ave., the southwest corner of the intersection.

The single-story building at the site was once home to Cornell Pharmacy, which now operates along Colorado Boulevard as Pencol Pharmacy.

Developer Mike Mathieson, principal with Denver-based Forbes Partnership, has proposed building a five-story structure at the site, with 55 residential units and 2,174 square feet of commercial space.

Mathieson, acting as Gaylord 52 LLC, purchased the 0.29-acre property for $1.5 million in March 2016, according to county records.

Mathieson’s other projects include the construction of micro units on a small lot in LoHi. He also plans to redevelop the Yota Yard site in RiNo.

Both of the site plans pertaining to the intersection of 18th and Gaylord still need to receive city approval.