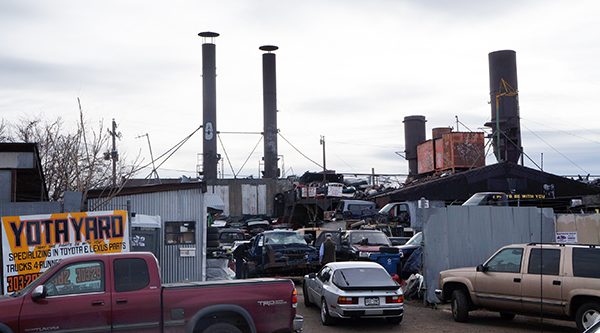 Salvage yard Yota Yard has operated at 3134 Walnut St. in Denver since 1999. Photo by Thomas Gounley

Out with the battered Toyotas, in with taco shop that sells more than 100 kinds of tequila.

That’s part of Michael Mathieson’s vision for a salvage yard in RiNo.

The developer, principal with Forbes Partnership, wants to repurpose the three existing buildings at 3134 Walnut St., and build one additional structure on the 0.43-acre lot.

He and partner Matt Dendorfer want to fill the space with the taco shop/tequila bar concept, as well as a gin and vodka distillery, a two-story beer garden and 300-person event space, all positioned around a central courtyard.

The redevelopment plans still need to be approved by the city.

Right now, the property is the home of Yota Yard, which specializes in Toyota and Lexus parts. The buildings date back to the 1890s, when a steel and pipe manufacturer operated on site, Mathieson said.

Mathieson, acting as Sophia Holdings LLC, purchased the property for $1 million in April 2014, according to city records. The previous owner bought it for $75,000 in 1998.

Yota Yard owner Nancy Wales said the business started in a lot across the street in 1997, and has leased 3134 Walnut St. since 1999. She said she’d like to relocate to a two-acre site.

Mathieson said he focuses on five neighborhoods — Sunnyside, LoHi, Tennyson, Uptown and Rino — and purchased the site as he saw RiNo was taking off, attracted by its history.

“Besides Rock Drill, there’s not other opportunities to reuse an 1890s steel mill,” he said.

Rock Drill is a much larger site about a mile away that once housed the operations of a mining equipment manufacturer. 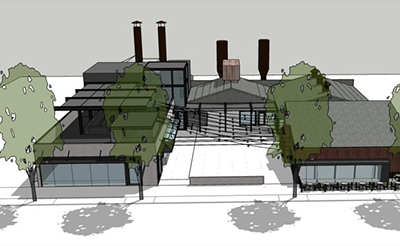 Mathieson hasn’t secured tenants for 3134 Walnut. Instead, he hopes to partner with a restaurateur to bring his concepts to fruition, likely sharing equity with them.

He said having multiple tenants would impede visitors’ ability to move between the venues on site, which he sees as a fundamental part of the project’s appeal.

“I don’t know anybody in Colorado that doesn’t like tacos,” he said, adding he’s unaware of other venues locally that sell more than 30 types of tequilas.

Mathieson wants the distillery to produce a low-calorie organic cocktail targeted for women, and hopes to do some canning on site.

The plans submitted to the city do not include any on-site parking, and indicate none may be required because the property is within a half mile of the 38th & Blake light rail station.

Mathieson said he plans to offer valet parking at 3134 Walnut, with cars being parked in several nearby lots that he owns.

Mathieson hopes to begin repurposing the existing buildings on site in the second quarter of 2018, with completion in early 2019. The planned new structure, to be used for the beer garden, would be part of a second phase.

Mathieson’s other projects underway include three stories of micro units on a small LoHi lot and Tennyson 47, an apartment building nearing completion at 4390 Tennyson St.

Salvage yard Yota Yard has operated at 3134 Walnut St. in Denver since 1999. Photo by Thomas Gounley

Out with the battered Toyotas, in with taco shop that sells more than 100 kinds of tequila.

Get a clue Dave…a Mexican Taco Tequila Bar located on a 125 year old industrial property where all the buildings are being fully restored is not the definition of gentrification by any standard. It would be very hard to displace poor people of color since no people of any color have ever lived at this location and they were never involved in operating the existing junkyard over the past 19 years.

Why is sarcasm always lost on the young?