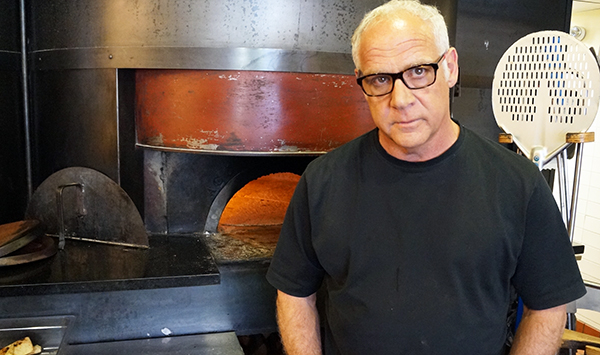 Marco’s Coal Fired owner Mark Dym stands in front of the pizza ovens in his restaurant near Coors Field. Photo by Thomas Gounley.

The owner of two Denver-area pizzerias said he’s dropped plans to settle with an Ohio-based chain that sued over the name of his restaurants. Now he plans to “fight it to the end” in court.

Mark Dym — who owns what has been operating as Marco’s Coal Fired Pizzeria with locations near Coors Field and in Englewood — said this week that he considers his legal adversary, Toledo-based Marco’s Pizza, a big bully. And he claims that the two companies’ respective operations are “not even close to being the same product.”

“We are so Mars and Venus,” Dym said. “Men and women … They’ve got customers. I’ve got guests. We’re like night and day.”

Marco’s Franchising LLC — which oversees the 900-plus franchised Marco’s Pizza locations across 35 states, including Colorado — sued Dym and his restaurants in October. The lawsuit, which has not been reported previously, accuses the Denver operation of infringing on its “Marco’s Pizza” trademark, which the company says it registered in 1986, and its “Marco’s” trademark, registered in 2012.

“Coal-Fired Defendants’ acts of infringement have been and continue to be committed with the willful intent to cause confusion and mistake, to deceive, and to trade on the goodwill established by Plaintiffs through many years in business,” the Ohio Marco’s said in the lawsuit.

The Ohio Marco’s is represented by James G. Sawtelle and Christopher M. Jackson of the Denver office of Sherman & Howard LLC. Sawtelle did not respond to a request for comment.

Dym opened Marco’s Coal Fired Pizzeria at 2129 Larimer St. in Denver in June 2008, a year after moving to Colorado from Florida.

Although his given first name is Mark, Dym said he was raised in an Italian-Jewish neighborhood in Brooklyn, and people have called him “Marco” throughout his life. “Coal Fired” references the fact that one of his two pizza ovens imported from Italy burns coal in addition to wood (the second just burns wood), and that Dym was inspired to get into the business by a Florida pizzeria that had “coal fired” in its name.

The “Pizzeria” portion is self-explanatory, although Dym said this week he’s dropping it from the name, and now considers the restaurant to be “Marco’s Coal Fired.”

Shortly after the 2008 opening, Dym received a cease-and-desist letter from the Ohio Marco’s Pizza. Dym said this week that he’d never heard of the company, and that it didn’t have restaurants in Colorado at the time. Dym said he contacted an attorney, who sent a letter to the Ohio company, which the company didn’t respond to.

In 2011, Dym opened a second location, with the same name, in Englewood. Four years later, his operation was named “Independent Pizzeria of the Year” by a trade publication.

Then, in December 2015, Dym decided to change the name of his restaurants, to Racca’s Pizzeria Napoletana — a shortened version of Latorracca, the maiden name of Dym’s wife and co-owner Kristy. That month, Dym separately spoke with BusinessDen, Westword and the Denver Business Journal, all of which ran stories reporting that a primary reason for the change was the similarity between the name of Dym’s restaurant and the Ohio company.

“We’ve got a completely different product and people really started confusing us,” Dym told BusinessDen in 2015.

Dym said this week that the press “maybe got it a little wrong,” because the primary reason for the name change was to come across as more authentically Italian, and to pay homage to the Italians who’d helped him in the business.

Whatever the motivation, the new name didn’t stick — “everybody kept calling us Marco’s” — so in July 2017, Dym opted to change the name back, which Westword wrote about.

“Two days later, I get that stapled to a cease and desist from the Marco’s people,” Dym said.

The lawsuit was filed in federal court three months later.

Dym disagrees with the company’s allegations, but said he “really tried working with them” in an effort to avoid excessive legal cost and hassle. He said he was prepared to agree to a settlement that would have allowed him to keep his restaurant name, despite the fact that it included other components “way beyond what I wanted to do.”

Then, Dym said, after he shook hands on a proposed settlement with the company’s attorney, the company came back with another request he wouldn’t agree to.

Dym, who said his legal bills are already in the six figures, said he told the company in court last month that the proposed settlement was dead.

Dym said he also wants to fight the company because he doesn’t believe he’s the only local “Marco’s” targeted by the chain. He cited a TV news report about a “Marco’s Pizza” in Asheville, North Carolina, changing its name to 828 Family Pizzeria after 23 years in business.

“You know what it does to a business to change that?” he said. “It crushes it. I lived that, to my own stupidity.”

In court documents, Dym has said that in 2012, when the Ohio company filed for the “Marco’s” trademark, the company’s CEO signed an affidavit stating that no other business already was using the name in a matter that would cause confusion.

Dym believes that should mean the company can’t claim confusion six years later. And the pizzas, he said, are completely different. Marco’s Coal Fired is the only restaurant in Colorado to be certified by the Association Verace Pizza Napoletana, which sets standards for those claiming to make Neapolitan pizza. The Ohio-based chain operates in the vein of Pizza Hut and Domino’s; its website advertises two medium two-topping pizzas for $6.99 each.

“Let me make pizza. Leave me alone. That’s all I want,” Dym said.

Marco’s Coal Fired owner Mark Dym stands in front of the pizza ovens in his restaurant near Coors Field. Photo by Thomas Gounley.

Marco’s Coal Fired founder said there’ll be no settlement after all with Dayton-based Marco’s Pizza, which has more than 900 franchised restaurants nationwide.

Truly unfortunate such a great establishment and guy is getting bullied like this! Some friends and I stumbled upon his place during his grand opening roughly a decade ago and he was manning the place by himself and was the gold standard of hospitality. He walked us through all his imported cheeses and flours and took the time to explain why he chose his very specific selection of ingredients and why it had to be coal fired for the best possible product. It remained my favorite pizza spot to this day, and it would really be a hard hit to the Denver foodie scene to lose this restaurant.

Hopefully if you’re reading this you go have a pie while you have the chance, and save some room for their delicious Nutella Pizza. Their dough makes all the difference.