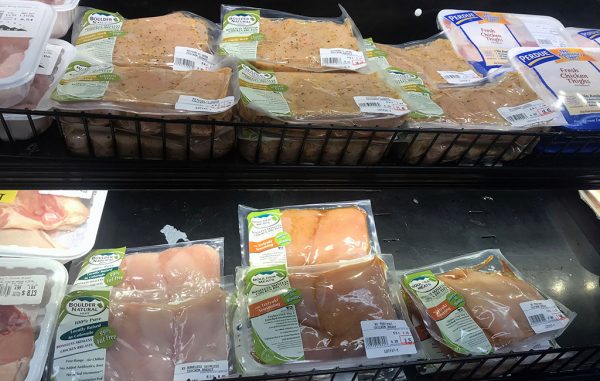 It is located at 4600 Joliet St. just south of the Rocky Mountain Arsenal National Wildlife Refuge, according to its website.

“Bolder Enterprises entered into a financial restructure process using Chapter 11 as part of the restructure. The primary reason for doing this is consolidation and restructuring of debt,” CEO Chad Anderson said in an email. “The need to do this was driven by expanding our business into new facilities and adding capabilities to better serve our customers in 2017. We are optimistic that we will be able to continue serving our customers for many years to come both during our restructure and well after our restructure is complete.”

Boulder Natural Meats was founded in 1985. It started selling chicken from local Colorado farmers in 2012, claiming its chickens eat a vegetarian diet and are not given antibiotics, steroids or hormones. The company introduced beef in 2015, according to its website.

Boulder Natural Meats sources its chickens from farms near Platteville, LaSalle and Elizabeth.

In 2015, the company recalled 3,600 pounds of beef, chicken and pork products for not declaring milk as an ingredient, according to a USDA news release.

According to bankruptcy filings, Boulder Natural Meats owes its landlord $40,000, Eastern Quality Foods $400,000 and Connecticut-based North South Foods $860,000, in addition to 17 other creditors.

The company is not the first natural food business in the metro area to restructure.

Jeffrey Weinman of Weinman & Associates is representing Boulder Natural Meats in their bankruptcy. He did not return requests for comment.

The company, founded in 1985, said it's restructuring debt after expanding and plans to continue operating.

I worked for Denver Meat in San Jose under Tony Dr Prima and also Skip Sullens. Years ago I went to see about finding some history on my employment at a local union and they said there was no records what’s so ever. Would this be the the same company and just out of state ? I’d like to get info on the dates I worked and it was about 6 years. What can I do ?

There are many employees that did not get paid for at least the past month. If anyone know how these employees could somehow get paid for the past due payroll, I would appreciate any feed back.
Thank you.