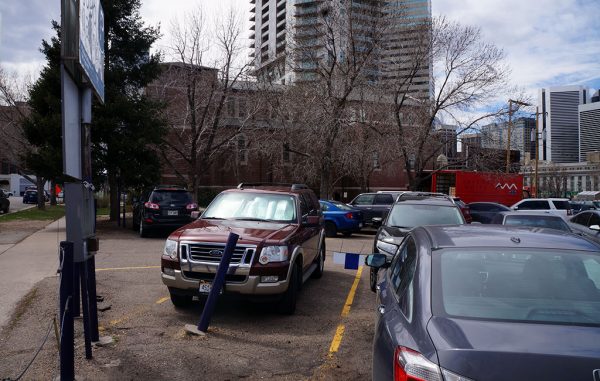 St. Andrew’s Episcopal Church and Mental Health Center of Denver want to build housing on a lot at 2061 and 2071 Glenarm Place. (Thomas Gounley)

A downtown church has both short-term and long-term plans to find a new use for an adjacent parking lot.

St. Andrew’s Episcopal Church, along with the Mental Health Center of Denver, submitted plans to the city last week proposing to build 48 affordable housing units on 0.43 acres at 2061 and 2071 Glenarm Place.

Prior to groundbreaking, the church also hopes to have eight “tiny homes” on the site for the homeless.

The site is within the Clements Historic District, so in addition to needing the usual approvals from the city’s Community Planning and Development Department, the plans also have to go before the Landmarks Preservation Commission.

First up is the 48-unit development, which the commission will consider Tuesday.

The lots are owned by the church, but the Mental Health Center of Denver would own and operate the building, according to documents submitted to the commission.

Ally Dodge, a St. Andrew’s parishioner and community liaison, said the church recognized that “like a lot of downtown churches, we are sitting on an asset.

“While that’s incredibly convenient, that’s not where urban environments in general are going,” she said of surface parking lots.

The church decided to focus on bringing in affordable housing as part of its tradition of serving the undeserved, Dodge said. It put out a request for proposals in October 2016, and selected Mental Health Center of Denver as its partner later that year.

The 42,500-square-foot building would have 42 one-bedroom units — each 440 square feet — as well as three two-bedroom and three three-bedroom units, according to the documents.

Karen Prestia, spokeswoman for the Mental Health Center of Denver, said the units would be reserved for households earning between 30 and 60 percent of the area median income.

The bulk of the project would be four stories, but the portion closest to the front of the church would be two stories, according to plans. The building would have multipurpose rooms on the first floor that would be used by both residents and the church.

Plans for the development were drawn up by Davis Partnership Architects. Prestia said the hope is to break ground in the summer of 2019.

The parking lot won’t necessarily host cars until then. St. Andrew’s is collaborating with another organization, Colorado Village Collaborative, to install tiny homes.

Cole Chandler, organizer of Colorado Village Collaborative, which is behind an existing tiny home village in RiNo, said the homes could be placed next to the church as soon as August.

Currently, the organization is only able to get a six-month permit, which would mean the tiny homes would be required to move from the site in early 2019.

Chandler said the tiny homes will be set aside for homeless women, particularly those who are LGBT. The organization is currently raising money for construction, and also seeking a general contractor, he said.

St. Andrew’s Episcopal Church and Mental Health Center of Denver want to build housing on a lot at 2061 and 2071 Glenarm Place. (Thomas Gounley)

A downtown church has both short-term and long-term plans to find a new use for an adjacent parking lot.

What a great idea and way to help affordable housing and homeless people downtown. I hope to see more of these projects upcoming.