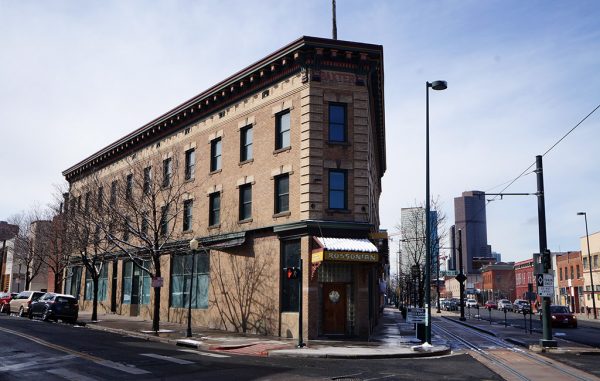 The new owner of a long-unoccupied landmark in Five Points has hatched a plan to “bring its historical uses back into play today.”

Developer Paul Books, president and founder of Palisade Partners, wants to add a fourth floor to the former Rossonian Hotel at 2650 Welton St. He wants to operate it as a hotel with a restaurant and music venue on the lower levels.

Farther down the block, Palisade also wants to build a nine-story mixed-use building, which would house some of the amenities for hotel guests.

“We think this is sensitive to the neighborhood, the history and the culture,” Books said. “With all of our projects, that’s a priority for us.”

Palisade has been working in Five Points since it bought the site for the Wheatley apartment building at 530 25th St. in 2013. The firm is wrapping up work on The Lydian, a mixed-use project a block from the Rossonian.

Palisade purchased the Rossonian Hotel for $6 million in August from Carl Bourgeois, who had owned it for roughly a decade.

The triangular facade of the three-story Rossonian has anchored the southwest corner of 27th and Welton streets for a century. It comprises 25,000 square feet, including a small basement and an annex added in the 1990s.

The Rossonian was a stopping point for jazz musicians like Duke Ellington and Ella Fitzgerald between the 1920s and 1950s, a time when black performers were turned away from other downtown hotels.

Both the hotel and jazz club began declining in the late 1950s. The Rossonian was briefly converted into office space in the 1990s but has stood empty for years.

Within weeks of buying the Rossonian last year, Palisade also purchased 2622 Welton St. for $850,000, and then 2608 Welton St. and 523 26th St., also for $850,000. The single-story commercial buildings on those parcels would be demolished to make way for the nine-story structure Palisade has proposed.

While Palisade at one point hoped to control the whole block, Books was unable to reach a deal with the owner of two narrow buildings between his buys.

The nine-story structure would have approximately 7,000 square feet of retail space on the ground floor, Books said. The second floor would be devoted to parking; there would be one level of below-grade parking as well.

The third and fourth floors would feature office space, as well as a gym. Books said one of the office floors might be devoted to coworking.

Residential units would fill the fifth through ninth floors, Books said. Seventy-five of the planned 102 units would be microunits.

“The whole idea is to be complementary to the other two projects we have in the neighborhood,” Books said, explaining that the Wheatley and Lydian generally have larger units.

Back at the Rossonian, adding a fourth floor would give the property 41 rooms. That’s “not really ideal” from a hotel management perspective, Books said, so Palisade is exploring the possibility of renting one floor of micro-units at the new structure for short-term stays.

The remainder of the units at the new structure would have traditional long-term leases.

Books said the idea is that guests at the Rossonian would be able to use the gym in the new structure, and possibly even grab a desk in the coworking space.

“There’s a lot of synergies between the two parcels,” he said.

Palisade has a signed letter of intent with an entity that wants to lease all 7,000 retail square feet at the new structure for a combination bookstore-restaurant-event space, Books said.

He said he wants a restaurant and music venue for the first floor of the Rossonian.

Books estimated it would cost $20 million to renovate and add on to the Rossonian and another $40 million to build the new structure.

The new owner of the long-unoccupied landmark in Five Points has hatched a plan to “bring its historical uses back into play today.”