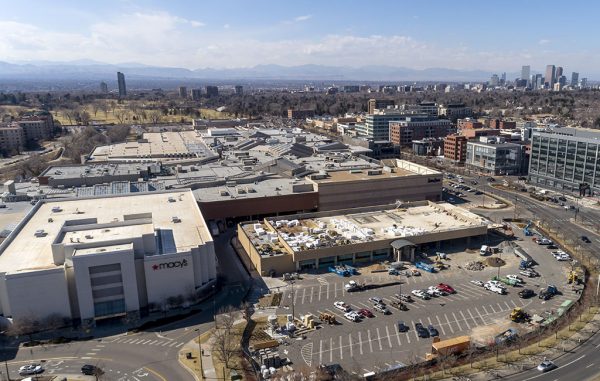 Crews are renovating the east side of Cherry Creek Shopping Center. (Guerilla Capturing)

Correction: A previous version of this story called restaurant Flower Child by the wrong name. It is fixed below.

Macy’s Furniture Gallery and The Container Store will be moving from the west side of the mall to the east, according to city building permits.

The two stores will move into the building that previously housed Safeway and Rite Aid, which is currently fenced off.

A spokeswoman for The Container Store declined to comment. Macy’s did not respond to requests for comment.

Macy’s Furniture and The Container Store have been the two largest tenants on the west side of the mall since Bed Bath & Beyond closed its store in November, decamping for Glendale.

The pending relocation will leave only Boulder Running Co. and two restaurants – BRIO Tuscan Grille and Elway’s Cherry Creek – on the west side.

One other tenant is scouting a potential spot on the east side of the mall. Several sources familiar with the real estate said Phoenix restaurant Flower Child has been looking at the location.

Crews are renovating the east side of Cherry Creek Shopping Center. (Guerilla Capturing)

The west side has poor utilization, especially in the pointless courtyard between the Container Store and the furniture gallery. With the larger tenants moved, it could open up a huge area for revitalization.