University of Colorado at Denver: The National Institute of Mental Health awarded CU Denver and EDCare Denver a $3 million grant for a five-year research project on Binge Eating Disorder. The study is being done through the university’s Brain Research Program. 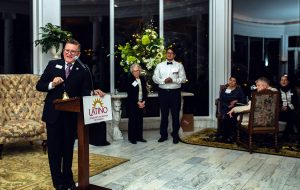 The LCFC received a grant from the Colorado Health Foundation of $1 million over four years which will go toward operations. The organization hopes to raise $3 million by the end of the year.

Teach for America: The Denver region of Teach for America is launching a two-year pilot program to recruit more early childhood education teachers. The program was funded in part by a $795,000 gift from Gary Community Investments.

Iliff School of Theology: On April 12, the university will host a celebration for Tink Tinker. The Tinker Program Endowment was founded in honor of his three decades of work at Iliff. The endowment will support the continuing education of Native American and Indigenous issues at the school. Tinker retired from Iliff in November 2017.

Brackets for Good: Throughout March, Denver charities and nonprofits will participate in Brackets for Good. Last year was the first time the event was held in Denver, and it raised $160,000. It lasts through April 9.

Wish For Wheels: On March 1, 50 employees from the Staenberg-Loup Jewish Community Center built 25 bikes through the Wish For Wheels program. Michael Staenberg donated the funds for the bikes, which were delivered to families at the Holly Park Apartments. Wish for Wheels donates the bikes to low-income families in the Mercy Housing Inc. program.

Kirkland Museum of Fine and Decorative Art: The Kirkland Museum reopened to the public in its new Golden Triangle home on March 10. Construction on the spot started in 2015.

In late 2016, the nonprofit transported artist Vance Kirkland’s three-room studio from the original museum at 13th Avenue and Pearl Street to its new home at 1201 Bannock St.

Denver Art Museum: The DAM announced on Feb. 21 that it was gifted 65 British masterworks by the Berger Collection Educational Trust. It is the largest gift of European pieces since the museum received the Kress Collection in the ‘50s. A selection of the pieces will go on display in 2019.

GoFarm: The Golden- and Arvada-based nonprofit is opening a new food share program at 16320 W. 64th Ave. The program will host a grand opening in May at the Arvada spot. The organization works with local farmers to give families in Jefferson County access to fresh foods.

Denver Architectural Foundation: The nonprofit recently relaunched its website and designed a new logo as part of a rebrand. It also launched a series of lectures, starting with an event at the Denver Art Museum on Tuesday.

The foundation received a $20,000 grant from the National Endowment for the Arts in February for its Doors Open Denver event in September.

Silicon STEM Academy: The academy funded a $20,000 scholarship fund for high-school students to learn programming skills. The scholarship is put together by Silicon STEM, the Colorado Technology Association and the Colorado Succeeds nonprofit. The second group of students in the program start this month.

Kitchen One for One: The food truck organization donates one meal for every one that’s been purchased. It recently held an event at the Lightshade dispensary in Peoria with Evolve Formulas of NanoSphere Health Sciences. The event helped to provide 800 meals to Denver homeless individuals.

University of Colorado at Denver: The National Institute of Mental Health awarded CU Denver and EDCare Denver a $3 million grant for a five-year research project on Binge Eating Disorder. The study is being done through the university’s Brain Research Program.

CU Denver is awarded $3 million to research binge eating, a fine arts museum opens its new Golden Triangle location, and the Latino Community Foundation strikes out on its own.