With a general contractor lined up, a Denver art museum is months away from beginning work on its new eight-figure home base.

“We are really close,” Stauber said. “We are wrapping the design now, so we have a plan in place to minimize changes during construction.”

The Kirkland Museum will relocate from 1311 Pearl St. in Capitol Hill and plans to debut its new building in 2017. Denver-based Shaw Construction is handling the project.

The Chambers Family Fund is bankrolling the project and bought the land for the museum in a pair of separate deals that closed over the last year. The fund paid a total $7.7 million for almost one acre at the northwest corner of 12th Avenue and Bannock Street, county records show.

Stauber said Kirkland Museum had its eye on the Golden Triangle site for its proximity to other nearby art destinations. 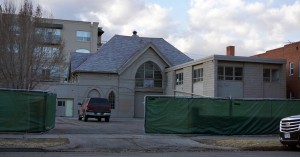 Part of the new space includes an existing structure. Photo by Burl Rolett.

“A couple of things aligned in that the property became available to us and it was where we wanted to be,” Stauber said. “It doesn’t get any better for the Kirkland Museum than to be cattycorner from the Clyfford Still Museum and around the corner from the Denver Art Museum.”

The museum’s plans include moving a 100-year-old building from Pearl Street over to 12th and Bannock. That structure will likely be uprooted and carried over in the spring of 2016.

The Kirkland Museum will stay open on Pearl Street until at least the end of 2015. Hugh Grant, who owns the Pearl Street building and is the museum’s founder and curator, donates the space to the museum.

Kirkland Museum’s new building will be about four times the size of its current home. Its 36,000 square feet will include two above-ground floors and a basement. Most of the basement will be storage space.

The main floor will house the museum’s galleries and the second floor will be office space.

Kirkland Museum has three main exhibits. The Vance Kirkland Collection includes more than 1,100 paintings and drawing by 20th-century Colorado artist Vance Kirkland; the International Decorative Art Collection holds about 15,000 objects from around the world; and the Colorado Art Collection features about 500 in-state artists with works collected from mostly from the 1870s to the 1980s.

Stauber said there are no specific plans for a major expansion to coincide with the debut of the new Kirkland Museum.

With a general contractor lined up, a Denver art museum is months away from beginning work on its new eight-figure home base.

I would love to see plans for the new building somewhere.

Any idea when construction will begin?