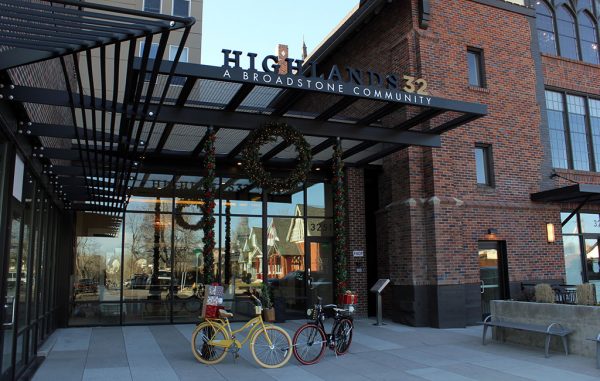 The seller was Phoenix-based Alliance Residential, which developed the property. A staffer at Highland32 said the complex has 148 units, with one-bedrooms starting around $1,650 per month.

The complex sits on about 0.7 acres, according to city records.

In October 2007, Redeemer Temple Inc. sold the property to Highland Square LLC, led by Tom Wootten, for $1.4 million, according to city records.

For a time, Denver-based RedPeak Properties planned to redevelop the site, incorporating the church structure. Its plans prompted a backlash and ultimately unsuccessful zoning lawsuit from a group called No High Rises in West Highland, according to the Denver Post.

RedPeak ultimately gave up on its plans, citing delays and rising development costs, according to the Post.

Neighbors and preservationists, wary of another developer coming onboard, then asked the city to give the church landmark status. City Council approved the designation in May 2014, despite opposition from Highland Square LLC and Wootten, who expressed concern about the designation’s effect on redevelopment prospects.

It was the first time in eight years the council had approved the landmark designation without the consent of the landowner, according to the Post.

In October 2014, Alliance purchased the site from Highland Square for $3.4 million.

The Highlands32 development incorporates the former church. Oasis Brewing operates in a portion of the building.

The sale of Highlands32 comes weeks after Alliance unloaded Dylan, a 274-unit complex in RiNo, for $91 million.

The company also sold the 191-unit Broadstone Cherry Creek this summer for $65 million.

The converted Beth Eden Baptist Church and an adjacent building in West Highland - the site of a multi-year zoning battle - just found a buyer.