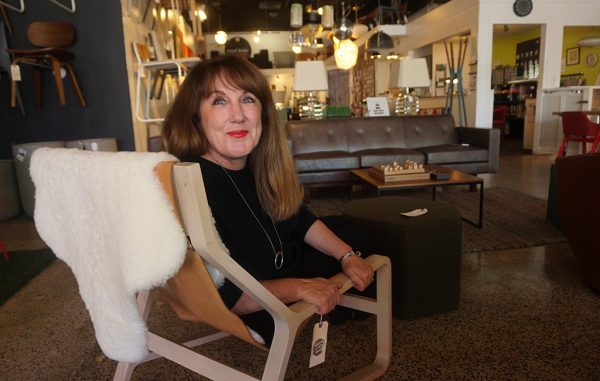 Jill Warner is opening Mod Livin’ stores in both RiNo and the Stanley Marketplace. (Lynn Yen)

Earthy tones of turquoise blue, wasabi green and rust orange have crept from the 1950s back into living rooms across America, according to a local store owner staking out new turf.

Jill Warner, owner of Mod Livin’ at 5327 E. Colfax Ave., said a younger generation’s embrace of midcentury modern furniture and accessories is behind her decision to open two new satellite stores specializing in the style.

Mod Livin’ will open in the Modern Nomad Denver design collective in RiNo this November, and in Aurora’s Stanley Marketplace early next year.

The retailer’s original Colfax location, which launched in 2001 and will remain open, has featured vintage midcentury modern pieces for years. It sources pieces from two dealers that travel the country, as well as the consignment and resale of items brought through its doors.

Local competitors include Mid-Mod Mall, which this year opened its third store specializing in vintage pieces on West 38th Avenue in Sunnyside.

Warner said the vintage category is increasingly being overshadowed by sales of newly produced pieces in the same midcentury modern style.

“It’s the younger crowd, 25 to 35 year olds,” she said, describing the new customers. “It’s the people living in RiNo.”

Brands that design new furniture in the same style include Blue Dot, Gus Modern and Modernica – which Warner sells. Williams-Sonoma’s West Elm line also has the tapered legs and sputnik starburst patterns of the era. 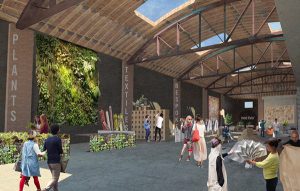 Mod Livin’s new store in RiNo is the second tenant that has committed to the Modern Nomad Denver design collective.

The 5,500-square-foot, open-air marketplace, created by Becky Miller, is located at 2936 Larimer St. in the former Empire movie theater. It has space for seven shops and is scheduled to open by Nov. 25.

“There’s been a lack of retail for the neighborhood, as opposed to bars and restaurants,” said Miller, a real estate broker. “With all the housing going in, we feel like we are filling a void.”

Miller’s own store, Modern Nomad Home, is the other tenant committed to the space.

Warner said the Mod Livin’ outpost primarily will sell midcentury modern accessories like pillows, lighting and rugs. She is using $50,000 of personal funds to finance the new location – mostly for inventory.

The third location in the Stanley Marketplace also will focus on accessories when it opens early next year.

“Once you start collecting stuff, it becomes part of your life,” Warner said of midcentury modern. “It’s a lifestyle.”

Jill Warner is opening Mod Livin’ stores in both RiNo and the Stanley Marketplace. (Lynn Yen)

Earthy tones of turquoise blue, wasabi green and rust orange have crept from the 1950s back into living rooms across America, according to a local store owner staking out new turf.

WOW Way to go Jill… I have shop at the Colfax location since you opened up… Best Vintage and Modern from Gus and Blue Dot in TOWN… well worth the trip – great quality at great prices !!!!

Right on, g/f! That location is great. Very close to my house on 35th and Columbine.

My old boss owns the Block Bldg at 30th and Larimer, must be in the next block 🙂

Very excited for your location at Stanley!