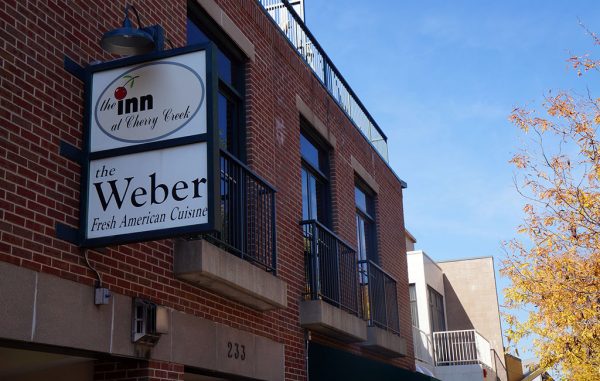 The Inn at Cherry Creek is located at 233 Clayton St. (Thomas Gounley)

Anyone staying overnight in Cherry Creek now has a 75 percent chance of staying under a Matt Joblon-run roof.

Joblon’s BMC Investments signed a 99-year ground lease Sept. 19 for the Inn at Cherry Creek property at 233 Clayton St. – the third hotel he now controls after he built the Moxy and Halycon in the last few years.

Partners in the deal are Chicago-based Aparium Hotel Group, which will operate the hotel, and CHMWarnick, which will serve as the property’s asset manager. Terms of the deal, signed with Peter Weber, who built and has operated the hotel, were not disclosed.

The retailers are art school Canvas and Cocktails and pet store Two Pals & A Pup. The restaurant is The Weber.

The Inn’s room rates start around $200, according to the property’s website.

Joblon said BMC plans to keep the property open as is for the next year, and use the time to determine how to best alter and rebrand it.

“We’re going to redo the puzzle in terms of what goes where and the programming,” Joblon said.

The focus of the expansion won’t be increasing the number of rooms, Joblon said, as much as it will be about adding meeting and community areas. The restaurant space also will likely expand.

Joblon estimated BMC could spend $30 million on the renovations. He said the Inn at Cherry Creek has operated since the building was constructed in 2003.

Joblon said he built a relationship with Weber and wanted to make sure that another party didn’t beat BMC to the deal and create a brand that would directly compete with its nearby hotels.

BMC has built two hotels in the neighborhood.

Halcyon opened at 245 Columbine St. in August 2016. Moxy, a new hotel brand from Marriott, opens at 240 Josephine St. on Oct. 26. Both hotels are within half a mile from the Inn at Cherry Creek.

The Inn at Cherry Creek is located at 233 Clayton St. (Thomas Gounley)

Anyone staying overnight in the neighborhood now has a 75 percent chance of staying under a Matt Joblon-run roof.

I have literally never heard of this hotel.