C Squared Ciders: The RiNo cidery announced earlier this month it would expand distribution chains into Minnesota. C Squared is using St. Paul-based Artisan Beer Co. to distribute to liquor stores and restaurants throughout Minnesota. “We have strong ties to the craft beverage scene in the Midwest, and Minnesota has a fantastic craft cider culture that we are excited to be a part of,” sales manager Eric Hatlestad said in a release. 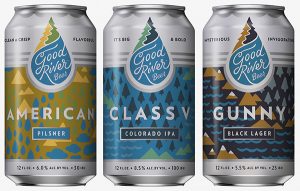 Odoski said it will start canning with its American Pilsner and Class V Colorado IPA, and will bring in the Gunny Black Lager.

The founders currently are raising capital for a Denver taproom and kitchen space, and also launched a nonprofit called 2 Percent for Rivers, which puts a portion of the brewery’s revenue toward river conservation.

FanDraught Sports Brewery: A local sports bar and taproom is waiting for state licensing to officially begin brewing. FanDraught opened in Parker in June and is currently offering craft beers from across the state. Owner Jeff Thomas said it will start brewing on a small pilot system, and will do some contract brewing in order to get FanDraught brews ready for mid-October. The company’s full-size, 10-barrel system is due to be delivered in November.

RiNo Beer Garden will open in mid-October in the former Jake’s Sports and Spirits location on 38th and Walnut streets. Co-owner Storm Ireland said it will have 60 taps, including space for specialty German beers, white wine, Irish whiskey and kombucha. He added that a majority of the beers will come from Colorado.

“It’s going to be like having a beer in the botanic gardens,” Ireland said. 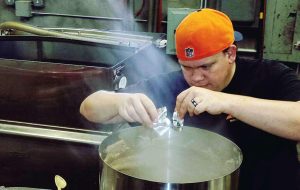 Welcome Home Brewery: Aaron Murphy and his wife, Sharon Cating-Murphy, have launched a GoFundMe crowdfunding campaign for Welcome Home. They have raised $1,700 of a $10,000 goal. The pair is looking to lease space near the Southlands Mall in Aurora.

Aaron, originally from Steamboat Springs, first started brewing at home, but entered and won a March Madness competition with Factotum Brewing. The prize allowed him to brew his red IPA on a seven-barrel system. Factotum is taking the red IPA to the Great American Beer Fest next month.

Denver Beer Co.: The brewery’s Arvada taproom hosted a release party on Sept. 21 for a new Water Tower Wit. Arvada Mayor Marc Williams made the special release beer with the brewery, and a portion of the proceeds from keg and pint sales will go to the Rocky Mountain Children’s Health Foundation. The Water Tower Wit will only be available at Denver Beer Co.’s Arvada location. The brewery is donating $40 for every keg and 50 cents for every pint sold over the next year.

TRVE Brewing Co.: Nonprofit Colorado Youth for a Change is hosting a monthly series called Brews for a Change, for which a portion of brewery sales will go back to the organization. The September event will be held at TRVE Brewing Co. on South Broadway on Sept. 28.

The Post Brewing Co.: Post is taking over Shine Restaurant and Gathering Place’s space at 2027 13th St. This is the fourth location for Post, which started its brewery and fried chicken restaurant in Lafayette. The brewery also has restaurants on South Broadway and in Longmont.

Shine Restaurant and Gathering Place: On Sept. 16, Shine held a closing party in Boulder. The restaurant first opened in 2012, later adding a brewery. Shine’s owners – triplets Jessica, Jennifer and Jill Emich – announced they would open a new restaurant location farther east in Boulder, but would ditch the brewery. Their new concept, Shine Restaurant and Potion Bar, is set to open this fall, according to its Facebook page.

Triple S Brewing Co.: The Colorado Springs brewery announced Aug. 28 that it would be closing. In a message on the brewery’s website, Steve and Sarah Stowell said a different brewery would take over the space at 318 E. Colorado Ave. Triple S first opened in the heart of Colorado Springs in October 2015.

Purpose Brewing and Cellars: A former brewmaster with New Belgium Brewery opened his own brewing venture in Fort Collins. A Belgium native, Peter Bouckaert moved to Colorado in 1996 with his wife and business partner Frezi. The couple is opening Purpose in Fort Collins with Zach and Laura Wilson. The grand opening was last weekend at 4025 S. Mason St.

C Squared Ciders: The RiNo cidery announced earlier this month it would expand distribution chains into Minnesota. C Squared is using St. Paul-based Artisan Beer Co. to distribute to liquor stores and restaurants throughout Minnesota. “We have strong ties to the craft beverage scene in the Midwest, and Minnesota has a fantastic craft cider culture that we are excited to be a part of,” sales manager Eric Hatlestad said in a release.

In the first edition of our newest roundup, covering statewide booze news, a RiNo cidery expands into Minnesota, a brewer launches a new canning line, and a beer garden prepares to open.