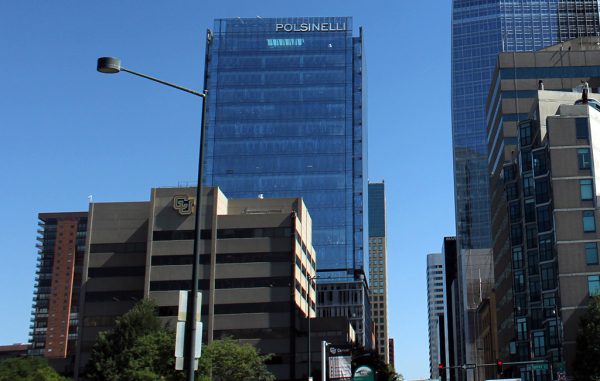 The 22-story office tower at 1401 Lawrence St. was listed for sale. (Kailyn Lamb)

One of the shiniest glass façades to reshape the downtown skyline has hit the market.

First Gulf is seeking a buyer for 1401 Lawrence St., according to a property listing posted by CBRE brokers Mike Winn and Tim Richey.

A listing by Winn and Richey online calls 1401 Lawrence a “trophy office tower” that provides “an extremely stable revenue stream with no near-term rollover.” The listing does not include a deadline for offers.

The tower’s largest tenants are Polsinelli, Jagged Peak Energy and CoBiz Financial. The building is 99 percent leased, according to the CBRE offering. Office lease rates range from $32 to $34 per square foot after expenses, according to real estate data firm CoStar.

1401 Lawrence broke ground in 2014 and topped out last year. Toronto-based First Gulf developed the building. Beck Group was the architect and general contractor.

Winn and Richey, who also listed the Triangle Building, did not return messages seeking comment. A message for First Gulf went unreturned by press time Wednesday.

The 22-story office tower at 1401 Lawrence St. was listed for sale. (Kailyn Lamb)

The tower could rival the record-setting Triangle Building sale earlier this year, citing prices as high as $725 per square foot.