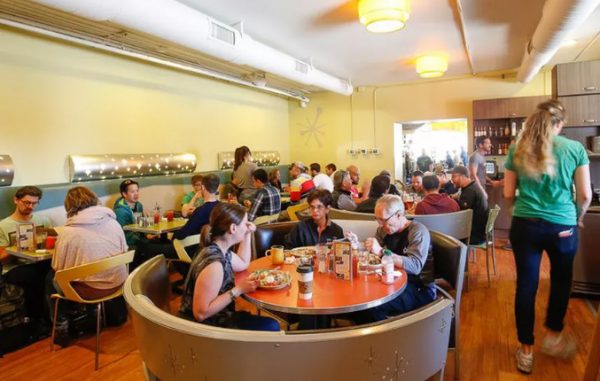 Snooze is coming to the Tech Center.

The popular breakfast chain signed a lease for the former Woody Creek Bakery & Café at 5073 S. Syracuse St. and hopes to open in early 2018.

CEO David Birzon said he thinks the brand can open 10 stores per year nationwide. By the end of 2018, Denver-based Snooze will have 35 locations, and he wants to hit 80 in five years.

“We believe every neighborhood should have a Snooze they can call its own,” Birzon said. But there is a limit. “We don’t want to become ubiquitous. We aren’t going to have one on every corner.”

It’s not just people of the Front Range that can’t get enough of the restaurant. It has stores in Texas, California and Arizona, with possible expansions into Kansas City and Nashville.

Each store brings in more than $3 million annually, Birzon said.

“From our popularity, we could afford to open more in this market.”

The 4,000-square-foot DTC space has a 600-square-foot patio, high ceilings and floor-to-ceiling glass windows on three sides. The restaurant will seat about 160 people.

The interior is being gutted and rebuilt. The architect is Omaha, Nebraska-based FHA. Snooze is taking bids for a general contractor.

Birzon said the new location will cost $1.3 million to build, and the restaurant has backing from private equity firms.

This will be the ninth Snooze in Colorado, following a Westminster location opening in June.

Birzon said the chain is searching for other locations in the area, including along the Interstate 25 corridor and in western Denver.

The popular breakfast chain signed a lease for the former Woody Creek Bakery & Café at 5073 S. Syracuse St. and hopes to open in early 2018.

Still never eaten at one despite several attempts… Just not willing to wait an hour to eat. They should allow reservations or call ahead seating.