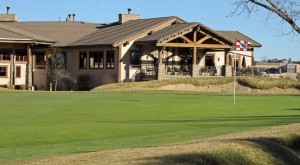 Valley Country Club has sued its longtime water supplier twice in as many years. (Aaron Kremer)

A Centennial golf club claims a regional water authority is fighting dirty and not delivering 600,000 gallons per day of sewage it needs to irrigate the fairways.

The 462-member country club claims the ACWWA has failed to supply its golf course with wastewater as part of an agreement the two entities struck in the ’80s.

Two years ago the club sued the water authority over demands to charge the golf course for its water.

In September 2015, a trial court ruled in VCC’s favor, saying that ACWWA must continue providing the country club free wastewater. However, the court did not specify the amount of water the ACWWA was required to give to the VCC, the new lawsuit claims.

In early 2016, while the case sat in the Colorado Court of Appeals, ACWWA told the country club it would stop supplying the 600,000 gallons of water per day, according to the lawsuit. The water authority has refused to provide that amount of water for this season as well, according to the suit.

The lawsuit says “VCC has informed ACWWA that it must abide by the terms of the Effluent Agreements and the parties’ historic pattern of delivery and provide up to the 600,000 gallons per day during the 2017 irrigation season, but again, ACWWA has refused.”

Its most recent case was filed July 20. Both VCC and its attorney, Darrell Waas of Waas Campbell Rivera Johnson & Velasquez, declined to comment. ACWAA did not return calls seeking comment.

Valley Country Club has sued its longtime water supplier twice in as many years. (Aaron Kremer)

In its second lawsuit in as many years, a Centennial course claims a regional water authority is fighting dirty and not delivering the sewage it needs to irrigate the fairways.