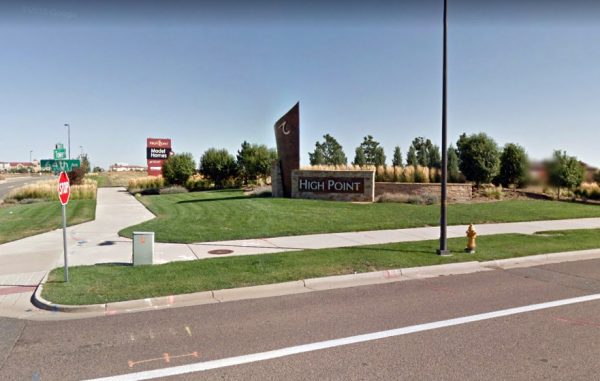 More than 1,000 acres has traded hands near Denver International Airport.

The undeveloped land is a large chunk of High Point, a 1,800-acre master-planned development straddling Denver and Aurora that LNR Property bought in 2006. LNR, which was acquired by Starwood Property Trust in 2013, has since sold off portions of that assemblage – including the land around the Gaylord Rockies resort and conference center – to other developers.

Westside’s High Point property starts at the intersection of Tower Road and East 64th Avenue and continues north to East 72nd Avenue in Denver. On the Aurora side, it stretches east to E-470 and follows that road south of East 64th Avenue.

Westside principal Andy Klein said High Point lies in the fastest-growing part of the city, and thinks growth will continue.

“There’s utilities, the ability to work with the municipalities for entitlements and job growth,” he said. “Both Denver and Aurora very much want to see this property developed.”

Klein is envisioning the development as a mixture of tourist amenities like hotels and local neighborhoods. The Denver side of the border is likely to have denser, multi-family developments, he said, while available sites on the Aurora side will favor single-family home sites.

Klein said home builders like Century Communities and D.R. Horton that bought lots from High Point’s previous owners are hungry for more. And he estimates that all of High Point’s remaining residential lots will be spoken for in five years.

“We think (the development will have) roughly 400 acres of residential, which would translate to between 1,500 and 2,000 units, be it apartments, attached and detached housing,” he said.

Homes in High Point listed by Century Communities and D.R. Horton are being marketed for between $320,000 and $380,000, according to the homebuilders’ websites.

Klein anticipates that the rest of High Point – office, retail, hotel and entertainment projects – will take a decade. For the office space, Klein hopes for a corporate user along the lines of Panasonic, which is pitching its regional headquarters on the west side of Tower.

“As DIA grows up, a lot of companies want to locate near the airport,” he said. “Everything about the airport has a huge impact on the economy.”

Westside has about 40 acres on Tower Road ready for stores, restaurants and hotels. Klein said he hopes to attract recreational projects, like a golf course or racetrack.

“If you look around the city, in the DIA corridor, hotels have the highest occupancy,” he said. “And when Gaylord opens, there will be 4,000 hotel rooms within half a mile. That creates a lot of opportunities for an entertainment user.”

The Gaylord Rockies hotel and conference center is scheduled to open in late 2018.

LNR CPI High Point LLC purchased the 1,800-acre High Point development in 2006. Homebuilders and other developers have begun work on the original property since then. Last year, LNR sold a 130-acre chunk around Gaylord Hotel to a Houston hotel developer for $9.2 million.

High Point will be its biggest development. Klein said being a master developer is like “being the producer of a movie.”

“You put together all the parts,” he said, “and hopefully, in 20 years, your community remains a place people want to be.”

The undeveloped land is a large chunk of High Point, a 1,800-acre master-planned development straddling Denver and Aurora.

Brain matter seems to be in short supply when it comes to land development. Wasn’t one of the major arguments in favor of building DIA, to abandon Stapleton, because it was so close to nearby housing? Wasn’t it about 2 years after DIA was finished that housing developments began springing up around the new airport? Isn’t it also odd that our zoning department is adamant about reducing urban sprawl, and all the silliness about ‘sustainability’ unless of course it lands within Denver’s municipal boundaries? Annex more land and Denver Zoning embraces sprawl. Seems like building the property tax base might be the real motive behind the Buchanan/Hancock/City Council policy of controlling growth AND getting some kind of kickback from developers. Excuse me, those aren’t bribes or kickbacks, they call them, “campaign donations”.