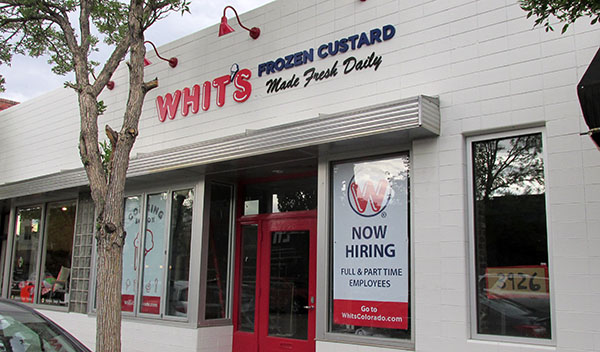 After 31 years at McDonald’s, Don Kissack is trading in fries for frozen custard.

The first Whit’s Frozen Custard west of the Mississippi will open Aug. 13 at 3926 Tennyson St.

Ohio River Valley natives may recognize the Ohio-based franchise that has 40 stores nationwide. Tennyson owner and operator Kissack hopes to open more locations across Colorado. He bought the franchise rights for a 65-mile radius.

“What we make today is what you are eating today,” Kissack said. “It’s part of the flash. You come in and see the custard coming out.”

The 2,200-square-foot store will seat 30 people and feature accordion windows facing the street. There will be adult counters and lower kid counters. MDC Denver designed the space, and Squareroot was the contractor.

He spent $600,000 to fix up the building and to build out the frozen custard shop.

He said many frozen custard shops also have food, but for Whit’s, “Custard is our main thing.”

Whit’s will be joined on the block next year by High Point Creamery, at 3977 Tennyson St.

“You can’t stop someone from coming in, but the strong will survive,” Kissack said about potential competitors.

After 31 years at McDonald’s, Don Kissack is trading in fries for frozen custard.

Now they have closed 😢