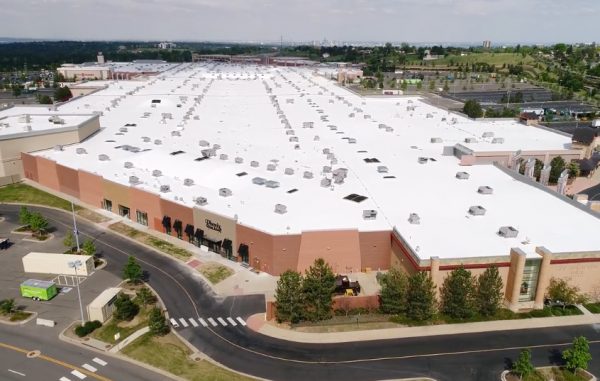 A May hailstorm so viciously battered the Colorado Mills mall in Lakewood that it may not open again until late 2017. But it’s not the first time the shopping center sprang a leak.

Four business owners with stores in the 1 million-square-foot mall said they repeatedly dealt with a leaking roof when lesser storms rolled through the Front Range.

“Anytime it rained you had to put buckets everywhere,” said Eduardo Khan, who worked at Accessorize Me, a fashion store owned by his brother, Ali Khan.

Accessorize Me had been in the mall for a year and had just renewed its lease when the violent hail storm hit. Eduardo said that the repeated leaks were not limited to their store, and that he often saw the mall’s cleaning staff placing trash cans underneath leaks in common areas.

A staff member from Kimco Services, which does the cleaning at the Colorado Mills, confirmed that the roof would leak frequently.

Mall owner Simon Property Group posted on the mall’s Facebook page that the property was closed to assess damage on May 11. The mall opened in 2002.

Officials from the mall did not respond to questions from BusinessDen about the history of leaks.

The roof has some skylights, but a drone flight over the mall doesn’t show much damage. Steve Walker, owner of The 5th Dimension virtual reality ride, said that entire sections of the roof were broken. His ride was underneath one area where water was coming into the building, but he was able to place a tarp before too much damage was done.

Walker said that while the roof may have had problems, he doubted mall officials could have predicted a storm that dropped golfball- and baseball-sized hail onto the building.

“They had some serious roof problems, but that was a serious-size storm,” he said.

Mark Dym, co-owner of Racca’s Pizzeria Napoletana, said he was able to get to his restaurant the night of the storm, after the mall initially closed.

“There (was) water coming up over my shoes and into my socks,” said Dym, who has been in the mall for a year. He said Racca’s also had problems with leaks and that mall officials were not responsive when he brought the issue to their attention.

Dym said he’s concerned about the possibility of reopening at the mall.

“It’s not like they’re going to patch (the roof),” he said. “The lack of communication is baffling. To me, it’s sort of telling.”

Several mall tenants said they are not paying rent while the mall is closed.

It doesn’t appear that any substantial construction has started in the month since the storm.

Stacie Oulton, public information officer with the city of Lakewood, said only one building permit has been issued to the mall since the storm, and that was to Target to replace its roof. Iowa-based Imperial Roof Systems Co. was the contractor on that job. Construction on the replacement roof took a week, according to Target staff at a job fair for former Mills employees on June 7.

Oulton said the mall put a temporary roof on the building, for which it was not necessary to get a permit. The mall will need to apply for water restoration and roofing permits, but the city of Lakewood has not received any applications yet.

A May hailstorm so viciously battered the Colorado Mills mall in Lakewood that it may not open again until late 2017. But it's not the first time the shopping center sprang a leak.

Yup! All true. When at Burlimgton we were constantly having to put out trash cans when it rained. Burinhton also paid for all of those j9bs. As well as the ceiling tile replacement. So if there were that many problems when it rained I can only imagine what it was like for that hail storm. They should be held accountable for all damages and lost income because ultimately they were responsible for hiring the people they did for the roofing job. Then they can go after the roofing company.

I manged a store there for 6 years. During this time we leased a space, then eventually upgraded to a larger space. Both spaces had noticeable leaks during rainstorms and it was “our problem” as we leased the space. Obviously I can’t go up and fix a hole in a roof.