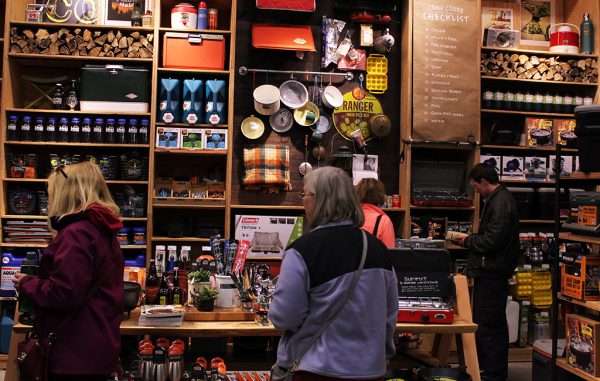 An REI Co-Op opened in the Dillon Ridge Shopping Center on May 6.

Two years ago, REI employees would blush if you caught them in a Sports Authority.

These days, they feel right at home: The Seattle co-op unveiled plans this week to move into a second big box store vacated by Sports Authority following its bankruptcy last year. It paid $9.5 million on Tuesday for the 45,000-square-foot retail shell on Arapahoe Road at Interstate 25, according to Arapahoe County property records.

REI plans to relocate a store in Englewood to Greenwood Village this fall, the company said in a press release Tuesday. The seller of the Greenwood Village store is One Liberty Properties, a New York real estate investment trust. The company estimated that its gain from the sale is $6.5 million.

REI is no newcomer to Colorado real estate.

The company owns its Englewood store, too, purchasing the 25,000-square-foot building in the Centennial Promenade mall for $2.78 million in 1998, according to county records.

REI is also a property owner in Denver. It purchased its flagship store on Platte Street in 1998 for $3.9 million, city records show. The buy was part of a deal with the Denver Urban Renewal Authority, The Denver Post reported, where REI poured $30 million into redeveloping the turn-of-the-century structure beside Confluence Park in exchange for $6.3 million in tax increment financing from DURA.

The firm has nine stores in Colorado. Two of those locations – one just-opened in Dillon and now its future space in Greenwood Village – are former Sports Authority shops.

The outdoor recreation retailer is not the only business viewing Sports Authority’s demise as an opportunity for a real estate play. Bed Bath & Beyond is moving into the shuttered retailer’s space in Glendale, the Denver Flea has booked its Sportscastle space for weekend markets, and a climbing gym is taking over its former headquarters in Englewood.

An REI Co-Op opened in the Dillon Ridge Shopping Center on May 6.

It paid $9.5 million on Tuesday for a 45,000-square-foot retail shell on Arapahoe Road at Interstate 25.