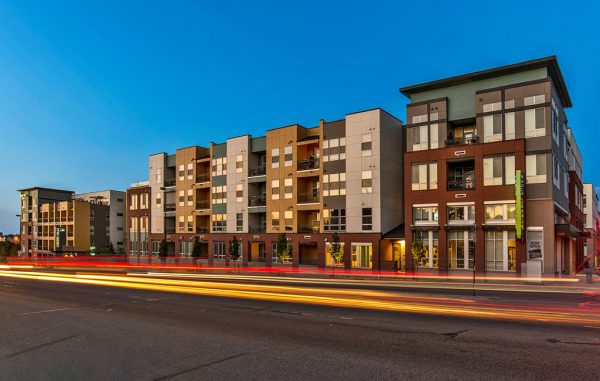 The 306-unit complex just south of the Hampden Bypass in Englewood sold for $78 million. (ARA Newmark)

Bell Partners nabbed a year-old, 306-unit complex just south of the Hampden Bypass in Englewood for $78.3 million on April 27, according to Arapahoe County property records. The purchase comes weeks after another Englewood complex netted the county’s highest-priced apartment sale this year to date.

The firm, acting as Bell Fund VI Cherry Hills, got a $51.8 million loan from New York Life Insurance Co. in connection with the buy, according to county records.

Bell Partners did not respond to messages seeking comment.

Jeff Hawks, Doug Andrews, Terrance Hunt and Shane Ozment of ARA Newmark represented the seller, Atlanta-based Wood Partners. Wood Partners picked up the 4.6-acre parcel for $6.78 million in 2013, another deal brokered by ARA Newmark, and developed the land into apartments.

Including this Cherry Hills project, Wood has sold at least five of its Denver-area properties in four years, including Alta Alameda Station in Baker and Del Arte Lofts & Flats (now Advenir at Del Arte) in Aurora. The company has reinvested in the metro area, though, purchasing a 420-unit apartment complex in Aurora in December 2015 for $60 million.

The sale of the complex at 3650 S. Broadway comes out to $255,882 per unit. That trumps the per-unit price on the other side of Broadway at Alexan CityCenter (now rebranded ArtWalk at CityCenter), which traded to Los Angeles-based CBRE Global Investors last month for $97 million, making it 2017’s biggest apartment sale in Arapahoe County so far.

The 306-unit complex just south of the Hampden Bypass in Englewood sold for $78 million. (ARA Newmark)

A real estate investment company nabbed a year-old, 306-unit complex just south of the Hampden Bypass in Englewood for $78.3 million on April 27.