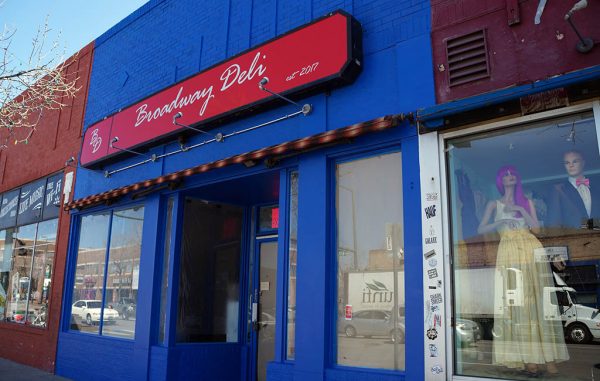 Broadway Deli has hung its sign above the storefront at 8 S. Broadway. (Amy DiPierro)

Broadway Deli has hung its sign above the blue-painted bricks at 8 S. Broadway, a location that over 40 years and three owners bore the name Swift’s Steak House #4. Two years ago, the Swift’s banner was replaced with a more descriptive title, Authentic Greek Cuisine, under its most recent owner.

“It used to be a gold mine,” he said. “It was very profitable. I raised my family out of that spot.”

The restaurant’s most recent owner purchased it in the mid-2000s, Westword reported, keeping the Swift’s Steak House #4 sign until 2015, even as the menu shifted to Greek.

The phone number listed for the Greek diner at Broadway and Ellsworth Avenue was disconnected. The future owners of Broadway Deli could not be reached at press time.

That stretch of Broadway soon will be full of fresh meat.

Across Ellsworth, a beer-centric bar and a Las Vegas-based Mongolian restaurant are underway. A block south, Kitty’s theater is being renovated into a distillery.

State business filings show that Broadway Deli LLC is a registered entity of RJBK Enterprises, which lists an address in Highlands Ranch.

Broadway Deli has hung its sign above the storefront at 8 S. Broadway. (Amy DiPierro)

I live in the area. The problem with this restaurant spot before was poor branding, cheap interior design and inconsistent hours.

The new sign for Broadway Deli doesn’t look appealing. It looks pretty cheaply and quickly designed. It has no personality. That doesn’t bode well.

You can do very well on S Broadway with food concepts, but you need to put in the effort. I’d invite Broadway Deli to look at the signage and interior design of Gary Lee’s, Atomic Cowboy, Adrift, Lena, abd others that have been successful.