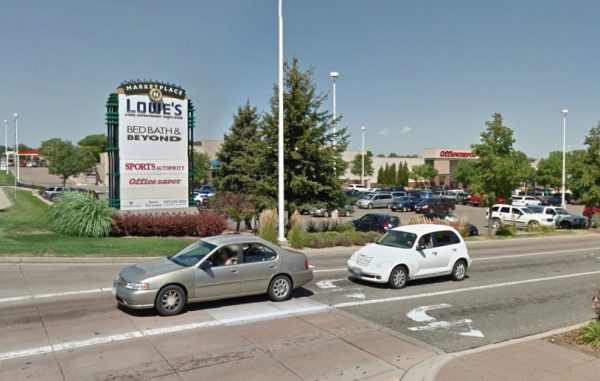 Calling all shoppers: Northglenn Marketplace is browsing for a buyer.

The property at 104th Avenue and Interstate 25 north of Denver that includes Bed Bath & Beyond, PetSmart and Office Depot hit the market three weeks ago, according to the broker marketing the mall and a City of Northglenn representative.

Debbie Tuttle, who heads Northglenn’s economic development office, said a new owner could “stabilize the center,” which has failed to lease spaces vacated by one-time anchor tenants like Old Navy and Marshalls, as well as big box retailers that have slid into bankruptcy since 2008.

“There are some great opportunities,” she said, including excess parking space available for future development. “There’s a lot of land there that could be utilized.”

The LLC that owns Northglenn Marketplace, HQ8 – 10410-10450 Melody Lane, shares an address with a Starwood Property Trust subsidiary office in Miami called LNR Partners, according to state filings and county property records. HQ8 bought the mall after it fell into foreclosure in 2012 for $61.2 million.

Neither Starwood nor LNR, which Starwood acquired in 2013, returned messages seeking comment.

The portion of the mall owned by HQ8 does not include a Lowe’s that backs up to the interstate, or a freestanding building on the east side of the property housing Woodley’s Fine Furniture and K&G Fashion Superstore.

Don MacLellan of Faris Lee Investments, who is marketing the 440,000-square-foot property for sale, said the mall is 35 percent vacant. Those vacancies include big empty boxes left by Borders in 2011 and, more recently, by Sports Authority. Each spot is more than 25,000 square feet, according to marketing material.

MacLellan said bids on the Northglenn property are due next Wednesday.

The Northglenn shopping center dates to 1968, when a predecessor built by Samuel Primack and Jordon Perlmutter called Northglenn Mall opened to the public.

By 1997, Westword reported vacancy rates of 80 percent at Northglenn. In 2001, Perlmutter repurchased the property, scraped it and redeveloped the land. Adams County property records show that he sold the mall at the end of 2005 for $90.7 million.

But the last decade has left a mark on Northglenn Marketplace. Since 2008, Circuit City, Bennigan’s, Borders and now Sports Authority have closed shop due to bankruptcy.

Calling all shoppers: Northglenn Marketplace is browsing for a buyer.