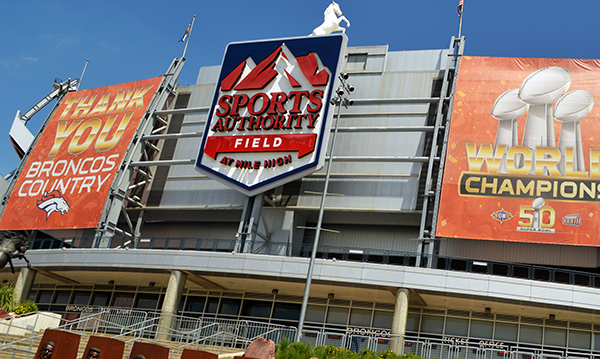 Sports Authority is trying to claw back more than $215,000 from two former executives, including the man credited with securing naming rights to Mile High Stadium.

The bankrupt retailer claims it offered Jeff Schumacher and Simon MacGibbon shares in Sports Authority’s parent company as part of compensation packages enticing both men to join Sports Authority in 2009, according to a pair of lawsuits filed last week in Delaware bankruptcy court.

The lawsuit claims the two executives accepted the shares, but never repaid a loan Sports Authority advanced them to cover taxes on their holdings. Sports Authority is asking the court to help claw back its principal plus accumulated interest.

Sports Authority filed for Chapter 11 bankruptcy in March, citing “relatively frequent turnover within the executive leadership” as one factor that harmed its business while rivals like Dick’s Sporting Goods and Amazon thrived. The Englewood-based retailer sold off most of its assets.

Sports Authority has continued to spar with former vendors and landlords in bankruptcy court, though its stores are now just a memory. But the complaints filed last week mark the first time former employees have become the target of the defunct retailer’s legal ire.

The two men named in the complaints on Jan. 17 go back more than a dozen years.

Schumacher and MacGibbon, who did not return messages seeking comment, worked together for five years at management consulting firm McKinsey & Co. before Sports Authority hired them in fall 2009.

Schumacher spent over a year orchestrating a $55 million deal to purchase naming rights to Mile High Stadium from the Denver Broncos, The Denver Post reported. But a week after the stadium was officially renamed in 2011, Schumacher resigned from his post at Sports Authority.

MacGibbon was not far behind. The pair regrouped on the West Coast and have gone on to co-found a series of consulting firms together, according to their LinkedIn profiles. Both now work for Los Angeles-based BCG Digital Ventures, Schumacher as CEO and MacGibbon as a managing director.