Crossroads Commerce Park is a roughly 60-acre industrial complex straddling the Denver-Adams County line near I-25 and I-70. (Courtesy Trammell Crow)

An upcoming industrial park saddled between Interstates 25 and 70 has nabbed another tenant.

Trammell Crow Co. has broken ground on a new build-to-suit warehouse at its Crossroads Commerce Park on the edge of the Denver line. Inline Distributing Co. will move into the 70,000-square-foot building and, once it’s finished, buy the warehouse from Trammell Crow.

The warehouse will be the third one at Crossroads that Trammell Crow Co. has built to suit a particular company, and Trammell Crow’s senior managing director Bill Mosher has said the pitch has been the same each time.

“With every group we’ve dealt with, the draw has been the central location and immediate access to I-25 and I-70,” Mosher said. “Being in the middle of the area’s population has been the key.” 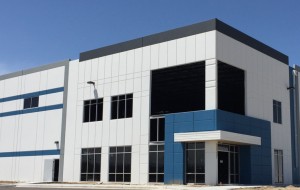 A building at the Crossroads Commerce Park. (Courtesy Trammell Crow)

Inline Distributing is based in Southern California and operates 11 distribution centers across the United States.

Inline’s building at Crossroads was designed by Ware Malcomb. Murray & Stafford is the general contractor and Colorado Business Bank provided financing for the project.

Crossroads Commerce Park is a roughly 60-acre industrial complex straddling the Denver-Adams County line. Inline will join Empire Staple Co. and Sierra Pacific Windows, which will own their own buildings at Crossroads. The Inline Distributing build is slated for completion in mid-2017.

Looking ahead, there are still four building sites left at Crossroads, each sitting on the Denver side of the property. Mosher said one of those buildings will be slightly smaller than the Inline warehouse. Another could run about 20 percent larger and the two others will be right around that same 70,000-square-foot mark.

By the time everything is finished, Crossroads Commerce Park will have about 1 million square feet of industrial space under roof.