Empire Staple Co. plans to hand over its current headquarters building to a developer. Photo by Burl Rolett.

A local real estate giant scored the first tenant for a North Denver industrial park – and it comes with a downtown development deal to boot.

Trammell Crow Co. will move Empire Staple Co. from Platte Street to its planned Crossroads Commerce Park on the northern edge of Denver. The deal is part of a land swap that will put Empire in a new building and give Trammell Crow its prime property at 1710 Platte St.

“It’s part of a complicated deal where they plan on buying our property and we’ll buy theirs, and then we will develop that (Platte Street) property,” said Bill Mosher, Trammell Crow senior managing director.

Empire’s new headquarters will be a 61,870-square-foot building just north of the Denver city limits in Adams County. The building is under construction alongside three speculative office buildings at Crossroads Commerce Park. Trammell Crow is developing all four warehouses, and Empire Staple will buy its building from Trammell Crow when construction is finished.

Mosher declined to say precisely what Trammell Crow would build at Empire’s downtown headquarters – a 1.3-acre plot next to Galvanize 2.0 on Platte Street – but said the project would be either office or residential. Current zoning allows five stories of development.

Trammell Crow has been working on the Empire Staple deal for a year, Mosher said. 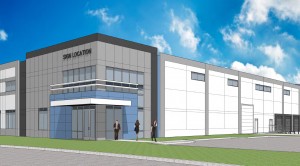 “They’ve been in the market for a few years to relocate their headquarters building,” he said. “Platte Street is kind of in the path of progress, so they decided they needed to move, but wanted to stay as close to I-25 and I-70 as they could.”

Empire Staple Co. opened in 1952 and sells electric and pneumatic power tools, safety products, shipping materials and other construction-related products. The company is the first announced tenant for Crossroads Commerce Park, which takes up nearly 60 acres straddling the Denver-Adams County line. The first four buildings are all on the Adams County side.

Those buildings will cost more than $50 million to build, Mosher said. Colorado Business Bank is the lender for the Empire Staple build-to-suit. Murray & Stafford is the general contractor for all four buildings, and Ware Malcomb is the architect on each building. Principal Real Estate Investors is an equity partner on the three speculative buildings.

The four buildings already under construction are scheduled for completion early next year. At that point, Empire will buy the Crossroads Commerce Park site, move in, and sell the Platte Street property to Trammell Crow.

The three spec buildings total 640,000 square feet with the biggest measuring about 360,000 square feet. Mosher guessed the three warehouses would take between five and eight tenants.

Plans for Crossroads Commerce Park call for up to six additional warehouses, with the project as a whole comprising about 1 million square feet of development.

“We could build up to six additional buildings totaling about 300,000 square feet,” Mosher said. “We’re really looking at them as a number of smaller build-to-suits for users.”

Trammell Crow’s previous industrial projects in the area include the Airways Business Center in Aurora and the Audi Product Research Center in Golden. The company is currently also developing a new office building for Denver Health at Sixth Avenue and Broadway.

Empire Staple Co. plans to hand over its current headquarters building to a developer. Photo by Burl Rolett.

In one fell swoop, a real estate firm has booked its first warehouse park tenant and lined up a redevelopment project on Platte Street.