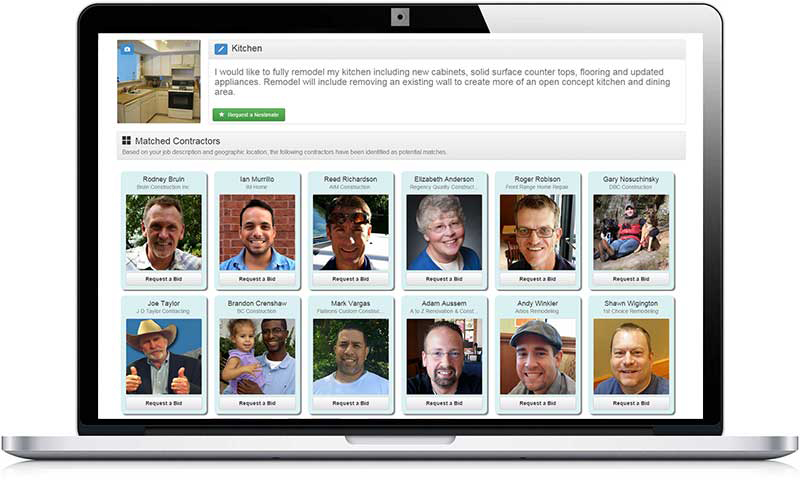 And the money will help it to hone a search algorithm he says sets it apart from competitors.

“The big difference with Matchnest is the algorithm we developed that studies and learns from contractors,” he said.

Matchnest disclosed its capital raise in a filing with the SEC on August 17. Williams said the startup is looking to raise $500,000 in a seed round and is also applying to startup accelerators.

On Matchnest, each search returns a list of contractors to contact, ranked based on the contractor’s past jobs. A plumber that worked at your neighbor’s house, for example, should appear above one that works across town.

Homeowners can also have their project blasted to contractors Matchnest thinks are relevant, because (for example) they’re nearby and have done similar work in the past. Over time, Williams said, Matchnest learns about how contractors respond to the leads they’re sent and ranks them accordingly.

Matchnest is free for users to search and for contractors to be listed. Contractors can pay to get first dibs on relevant leads and to have a profile that will appear in public search engine results. Williams declined to share revenue, paid membership numbers or the cost of membership.

By contrast, HomeAdvisor and Angie’s List sell contractors leads that come in when customers run a search. Angie’s List also charges users a homeowner a subscription to search. Williams thinks contractors only bite when they’re hungry for work.

“They’re just finding the contractor that’s most desperate for work at a given moment in time,” said Williams. “We’re finding the ones that are most relevant.”

Matchnest is stepping into the ring with two companies that have a history of trading jabs as they vie to control the market for hiring a contractor online.

The two are also much bigger than Matchnest, which just launched last year and has about 200 contractors along the Front Range actively using it. HomeAdvisor says it processed $30 billion in project revenue last year, and Angie’s List says it did half that.

Matchnest has already split its three full-time and three part-time staff between Denver and Dallas as it aims to expand. Williams said Dallas is a good market because of a growing population and fast development, much like Denver.

The startup also has a pilot project in which it sends a contractor into the field to estimate the cost of a project, then pings contractors on Matchnest so that they can send bids to the homeowner.

An tech startup linking homeowners needing repairs to contractors looks to expand from the Front Range into a second metro area: Dallas.

To learn more about MatchNest or to use the service visit http://www.matchnest.com