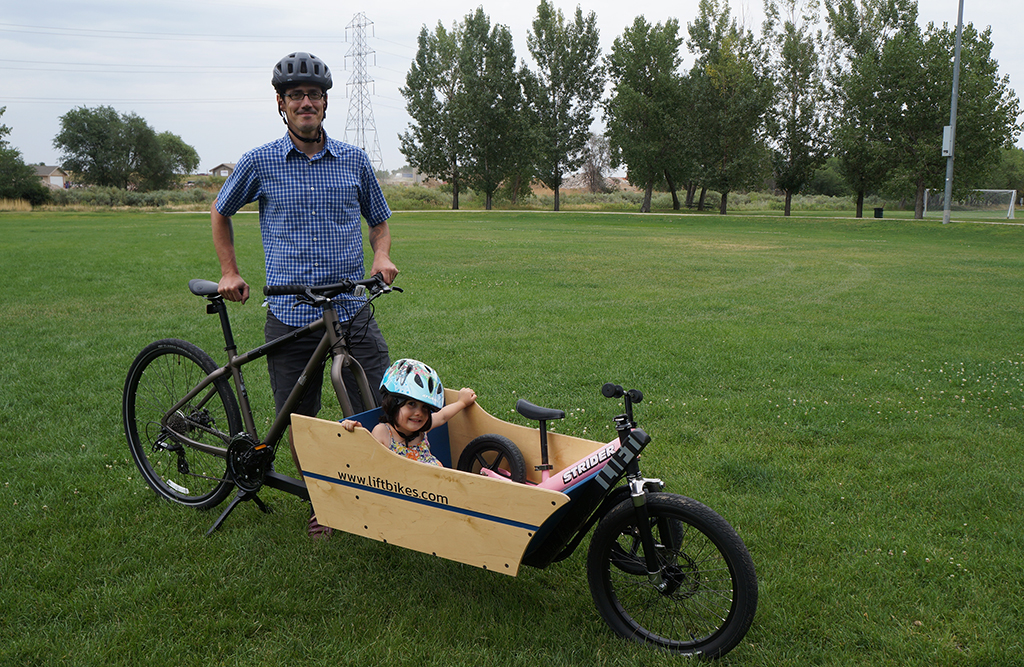 Scott Taylor always wanted to sell cargo bikes at Salvagetti, the bike shop he owned and operated for 10 years. But he feared he would only be spinning his wheels if he tried.

“They’re needlessly expensive,” he said, often $3,000 or more. There was no point stocking them.”

But the gears in Taylor’s head kept turning. Cargo bike designs often feature a basket set close to the ground between the handlebars and front wheel like a wheelbarrow. Since they’re generally not convertible, buyers spend thousands of dollars on “a bike that only does one thing” in addition to their regular bicycle, Taylor said.

Then last summer, just before he closed Salvagetti, Taylor had his eureka moment: the Lift, an attachment that can turn any standard bike frame into a cargo bike for $900.

“It was July 7 of last year. I was sitting in the parking lot of my bicycle shop before I closed it down,” he said. 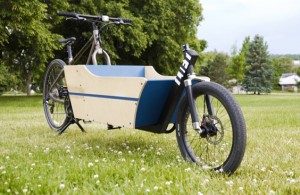 The $900 attachment converts a standard bike frame into a cargo bike. (Courtesy of the Lift)

Taylor has raised $75,000 in a crowdfunding campaign, enough money to purchase the materials to make more than 100 Lifts. The campaign closes on Aug. 18.

“This is obviously perfect for parents, for dog owners that want to take their dogs to the park and for small business owners,” he said, adding that he envisions branded crates parked outside of coffee shops and liquor stores.

“And cyclists that just want to have fun,” he said.

Taylor said that by removing the front wheel of a standard bike, he could make room for an apparatus that clicks into the front wheel fork and the rear of the bicycle frame.

He sent that first sketch to Chris Sulfrian, an engineer at Longmont-based Reeb Cycles and a co-founder responsible for fabricating the metal frames. The wooden crate is made by Luke Goodhue, a local woodworker who is Lift’s third co-founder.

Then the tweaking began. Taylor added a cable separator made by Denver local tandem bicycle makers da Vinci Designs, so that the front tire brake works with and without the Lift. He found a two-sided kickstand so that the bike won’t tip over when loading the crate.

He said the frame can support 350 pounds.

“For each tiny little subtlety here, I’ve had 10 sleepless nights,” he said.

For now, Taylor is not losing sleep over who will buy the bikes. Enough customers have pitched into the crowdfunding campaign to purchase minimum orders for parts that Taylor has to order in bulk from suppliers, like wheels.

And Taylor said the Lift is now a full-time job.

Down the road, Taylor said, he would like to license the Lift design to other manufacturers, one that can mass produce the Lift to make it cheaper and one that can make customized batches of the bikes.

Scott Taylor, who owned the Salvagetti bike shop for 10 years, has a startup device that can turn any bike into a cargo bike with enough space to ferry groceries or a dog.