A rendering of the planned development. Courtesy of Balfour)

Balfour Senior Living and United Properties will soon break ground on a new assisted living facility in Littleton, the third Balfour community in the Denver area. Balfour CEO Michael Schonbrun said he sees a hole in the senior living market around their planned location at 8290 W. Coal Mine Ave.

“There was a pretty significant unmet demand, especially in the assisted living and memory care worlds, and not so much on the independent living side,” he said. “Since Balfour is interested in growing the company, and we don’t have anything in that part of the metro area, it seemed like a good opportunity.”

The $20 million Littleton project will be the first project that United Properties and Balfour Senior Living have tackled together. 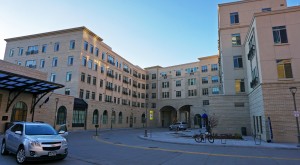 Those prices include three meals per day and around-the-clock nursing services.

Schonbrun plans to close on the land and begin construction soon. He’s estimating it will take about a year to build. Boulder-based DTJ Design is the architect on the project, and Wells Fargo will provide financing.

Balfour is based in Louisville and has two other assisted living complexes around Denver. The first is at Riverfront Park, where the company opened a 205-unit senior living complex last year. The second is under construction in Stapleton and eyeing an opening sometime in the first half of 2017.

Between the three projects, Balfour will have more than 350 assisted living and memory care units around Denver. 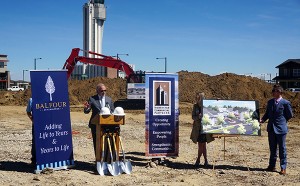 Schonbrun said he’s pushing to get more senior living out of the ground because demand for assisted living and memory care apartments is growing. But he knows he’s not the only one chasing the senior care market.

While he chose the Littleton location because there was not any competition nearby, he doesn’t expect to have the market cornered for long.

“What’s really going to separate the winners from the losers in the industry going forward will be the quality of the service that the residents receive,” he said. “And the peace of mind that families and residents have when they’re coming into one of our communities.”

A rendering of the planned development. Courtesy of Balfour)