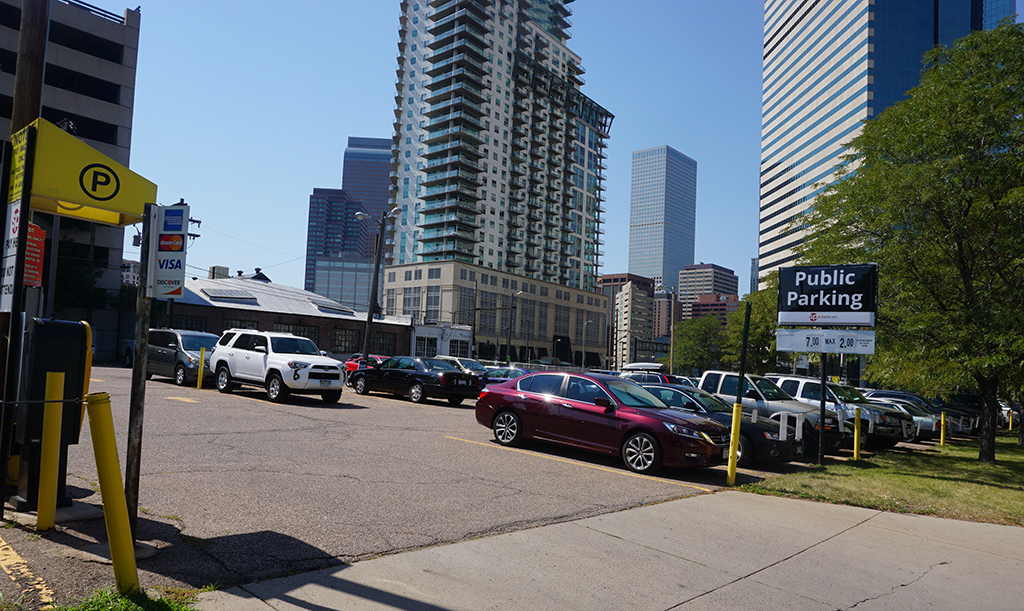 354 new apartments are planned for the corner of 20th and California streets. (Burl Rolett)

One of Denver’s busiest developers has picked a new neighborhood to drop a $100 million apartment building.

Trammell Crow will build the Alexan 20th Street Station on 1.14 acres at 2014 California St. The development company bought the real estate – now a surface parking lot – for $9 million in a deal that closed earlier this week. Schildt said Trammell Crow made an unsolicited offer on the land.

Trammell Crow’s plans call for 354 apartments in a single 12-story building. Schildt said about 80 percent of those will be studios and one-bedroom units, a ratio that is in keeping with most of Trammell Crow’s other apartment buildings in Denver.

Apartments will average about 780 square feet with target rental rates hovering at about $2.40 per square foot. That would put rent in a standard apartment at about $1,872 a month.

The building will also have a pair of courtyards, a fitness center, bike repair room, yoga room, dog washing station and a small office space for tenants that work from home.

Schildt said the views from the mid-rise tower will make stand out from other buildings downtown.

“We’re a 12-story building with great walking proximity to a lot of the taller office building developments that exist downtown,” he said, adding, “You’ll have fantastic views of both the skyline and the mountains.”

He also hopes the building’s design, drawn up by architecture firm Kephart, will help lure in tenants.

“We’re using a lot of enduring materials, masonry and glass, so we think the building itself with be something that will distinguish the complex.”

But Trammell Crow will be sticking to 12 stories, the maximum allowed by the site’s previous C-MX-12 zoning code. Schildt said his firm had already drawn up plans for a 12-story building before the site was rezoned, and redesigning a taller building could set the project back a couple of years.

“We would love to build higher, but when we put this site under contract the new Denver Arapahoe Square zoning was a year away,” he said. “And it’s almost impossible to design to zoning that isn’t fully baked.”

Trammell Crow Residential is one of the most active apartment developers in Denver right now, putting jumbo apartment complexes up in nearly every hot Denver neighborhood. The company has complexes in the pipeline in LoHi, the Highlands, Uptown, Cherry Creek, Sloan’s Lake and Five Points.

Schildt said Trammell Crow Residential has been developing in the Denver area since about 1998. Between 2005 and 2009, Schildt said, the company stayed busy on the Front Range but did most of its development in suburban areas.

For now, Schildt said, he’s not ready to pump the breaks on new Denver complexes.

354 new apartments are planned for the corner of 20th and California streets. (Burl Rolett)

One of Denver's busiest developers - with 3,000 residential units in the pipeline - has picked a new neighborhood to drop a $100 million apartment building.