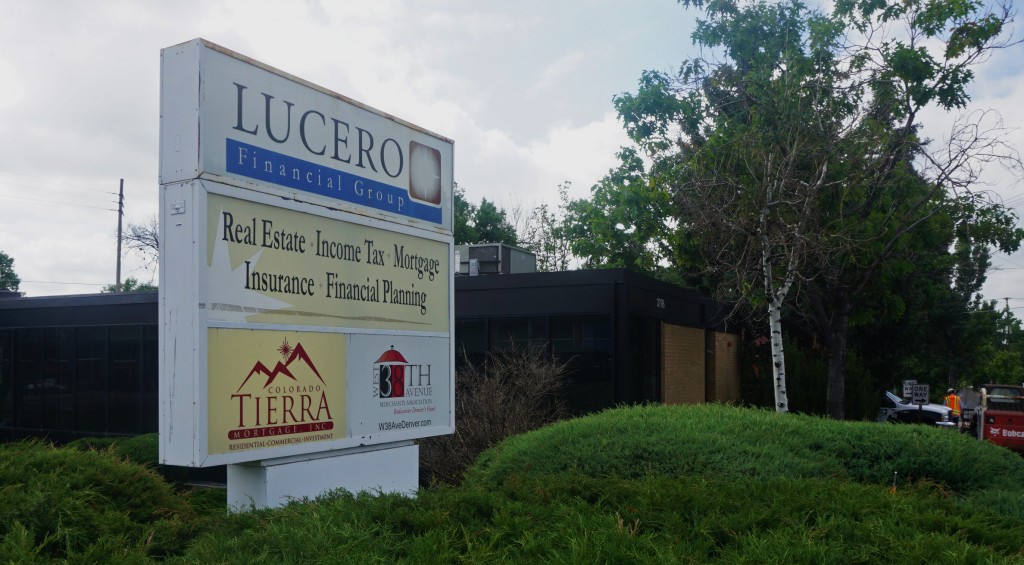 A financial firm recently sold off about 2 acres of land, including its own office space. Photo by Burl Rolett.

With more than $11 million worth of land deals sealed, a big-time Highlands apartment development is getting underway.

“I began marketing the property about two years ago through the grapevine to developers,” Lucero said. “Ironically, the director of Trammell Crow bought a residential property through one of my sales associates, saw the property, and brought me an offer.”

Trammell Crow Residential is planning to build 324 apartments on the 38th Avenue site, Lucero said. Construction fences are up, and abatement work is underway at some of the buildings on-site.

The deed for Lucero’s sale was recorded last Friday, about three weeks after Trammell Crow paid nearly $2 million for a smaller property fronting West Clyde Place. The most recent sale included Lucero Financial Group’s own office building at 3480 W. 38th Ave., the Bank of the West branch next door and trio of vacant parcels along West Clyde Place.

Lucero Financial Group will vacate its building in about 40 days. Construction will take about two years, Lucero said.

Alexan West Highlands will be five stories across the majority of the project. The backside of the development, which will run along West Clyde Place, will be four stories, Lucero said.

The development will also have about 32,000 square feet of retail space. Lucero will buy back the retail portion of the project after it’s finished. Lucero estimated lease rates on the retail side will run between $25 and $28 per square foot.

“There still might be a desire for a specialty grocery store,” Lucero said. “One of the popular items people asked for was also a coffeehouse, a couple of restaurants or a couple types of retail outlets that people right now have to go across town to get.”

Alexan’s West Highlands will follow the 68-unit Highland Place onto 38th Avenue; that building opened in February at 38th and Julian.

During construction, Lucero Financial Group is moving to a temporary office space at 2420 W. 26th Ave. But once Trammell Crow’s work is finished, Lucero said he expects to be back on 38th Avenue, either at a project of his own at 38th and Perry or at Alexan West Highlands.

“I’ve been doing business in Northwest Denver since 1976, since I was still in college,” Lucero said. “I’m not going anywhere.”

A financial firm recently sold off about 2 acres of land, including its own office space. Photo by Burl Rolett.

After buying $11 million worth of land in the past few weeks, a development firm is set to start work on an apartment and retail complex on 38th Avenue.