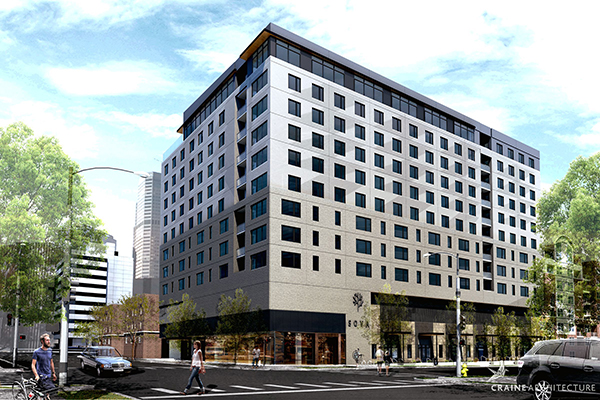 Rendering by Craine Architecture and used with permission.

The jumbo apartment buildings keep popping up in Uptown.

McWhinney will break ground this year on 211 new apartments at the corner of 19th Avenue and Grant Street. The project, called Sova, will replace a surface parking lot the Loveland-based developer bought two years ago.

“We’re really excited about the Uptown neighborhood,” said David Jaudes, McWhinney’s vice president of multifamily development. “With everything that’s going on there in terms of retail, new businesses and the expansion of the hospital, there’s a lot of exciting things happening over there and we felt this was a great property right in the middle of it all.” 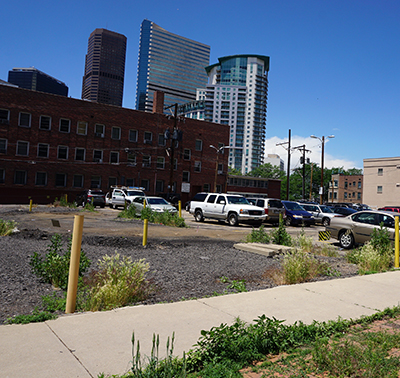 A view of the lot where the building will take shape. Photo by Burl Rolett.

Jaudes said the plan is to break ground near the end of this year. The complex will take about 22 months to build. Most of the units will be one-bedrooms and studios, Jaudes said, with some two-bedrooms. Sova also will have a row of street-level, townhome-style rental units.

The building will be 12 stories, Jaudes said, with a golf simulator, hot tub, barbecue area and lounge on a rooftop deck. It also will have a fourth-floor deck with a fitness center. McWhinney also plans a bike and ski repair room, dog wash and car-charging stations.

Sova will go up a block away from Alexan Uptown, a 370-unit building that Trammell Crow Residential is developing at 19th Avenue and Logan Street. Southern Land Co. is planning another major apartment project at 17th Avenue and Pearl Street.

Farther east in Uptown, Allante Properties is building another 84 apartments at 18th Avenue and Emerson Street.

McWhinney is financing the development with a section 221(d)(4) loan from the U.S. Department of Housing and Urban Development.

Jaudes said that arrangement not only will help the company pay for the building, it’ll also help McWhinney lease it out as new apartments fill the neighborhood.

Jaudes said the long-term, fixed-rate loan, which HUD issues to encourage construction of rental housing for moderate-income families, will help McWhinney keep its rents lower than other new apartments.

“We stress test pretty significantly and we’ve assumed a very low monthly absorption rate because of the supply in the neighborhood,” Jaudes said. “So we’re able to set our rents to where you’ll be able to live in a new building for the same price as some of the 10- or 20-year-old places.”

Craine Architecture designed the building. White Construction Group will be the general contractor.

Rendering by Craine Architecture and used with permission.

McWhinney plans to break ground this year on an apartment building that will boast amenities like a golf simulator, hot tub, barbecue area and lounge on a rooftop deck.