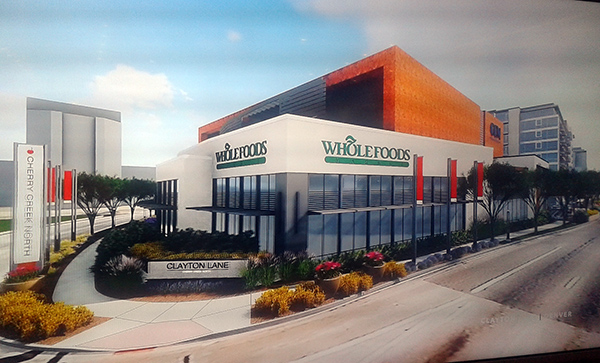 LAS VEGAS — The new owners of a prime Cherry Creek corner may revamp the front door to the upscale retail neighborhood.

OliverMcMillan is displaying plans for a new Whole Foods store in the Clayton Lane area, relocating the supermarket from its current perch at the edge of First Avenue and Josephine Street.

The renderings, which the San Diego-based developer is showing off in Las Vegas at this week’s RECon retail real estate convention, show a new Whole Foods essentially right on its current parking lot.

The new grocery store is part of a redevelopment plan that includes demolishing the now-vacant Sears along First Avenue. That massive department store closed last year. OliverMcMillan has announced plans to replace Sears with a pedestrian-friendly street connecting various retailers throughout Clayton Lane.

A series of 3-D schematics shows a phased redevelopment, with the Sears building coming down first make way for new buildings and an open-air courtyard in the middle of the block.

Tryba Architects is listed as the architect on the preliminary renderings.

OliverMcMillan and Invesco bought Clayton Lane in January 2016 for about $170 million. The acquisition included about 182,000 square feet of active retail space in Cherry Creek anchored by Whole Foods and Crate and Barrel, plus the 150,000-square-foot Sears store and auto shop that went dark last year.

The renderings, which the San Diego-based developer is showing off in Las Vegas at this week’s RECon retail real estate convention, show a new Whole Foods essentially right on its current parking lot.

The design concept you photographed was produced by Davis Partnership Architects for Oliver McMillan.