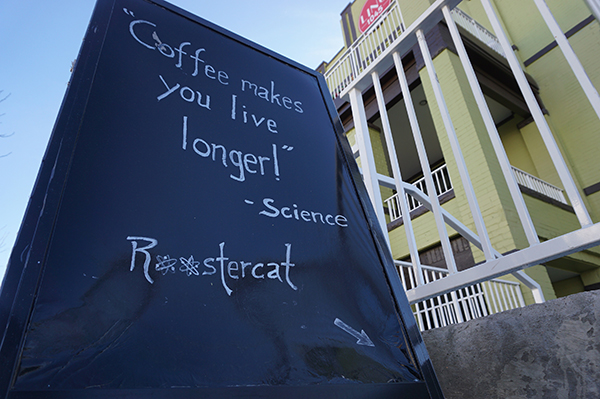 After running what they fancied to be a corner bar of coffee shops for four years, a Denver duo is twisting the concept for a second location in RiNo.

Roostercat Coffee is opening a new coffeehouse at the Backyard on Blake near Blake and 30th streets. It’s rolling into the coffee-crazed neighborhood with a plan to carry brands of locally roasted coffee not featured at Roostercat’s first location near 11th Avenue and Lincoln Street.

“When we opened (the first Roostercat), we were trying to make it the ‘Cheers’ of coffee shops,” co-founder Autumn Green said. “This one’s a little bit different. We’re opening it as an artisan coffee shop focusing on niche and local brands.”

Green and co-founder Colin Floom hope to open the shop, located at 3040 Blake St., in late April or early May. They signed a five-year lease on a 400-square-foot storefront in RiNo’s Backyard on Blake development last December.

They were drawn to the shop, Green said, because of the neighborhood’s swelling population.

“We want to get in before it completely blows up,” she said. “There’s a ton of new construction and apartments going in there, and there’s a lot of walkability in that neighborhood, too.”

The shop will carry over its drink menu from the Lincoln Street location, including lattes and cold brew. But also, they’ll eliminate most of the shop’s food menu because there’s already a restaurant in the Backyard on Blake development.

It’ll take three or four full-time employees to staff the shop, Green said, with some transferring over from the original Roostercat.

Green said while RiNo is one of Denver’s biggest coffee neighborhoods, she’s not concerned about competition. That’s because Backyard on Blake development includes townhomes, so the café will have a built-in clientele.

Green, 30, usually runs Roostercat’s day-to-day operations because Floom, 29, works as a producer and camera operator for TV shows such as “Teen Mom” and frequently is filming out of town. Green has spent time behind the scenes in the film industry as well, working at the MARC Theatre during the last five Sundance Film Festivals.

She’s been a coffee connoisseur since working at Lakewood’s Village Roaster coffee shop in high school, she said. After a string of coffee-related jobs took her from Denver to Puerto Rico, she and Floom decided to open Roostercat in 2012.

The co-owners will have a new twist for the original Roostercat, too. They plan to buy a coffee roaster for the shop to begin cooking up coffee flavors of their own.

“We’re looking for a roaster,” she said. “We just need to find the right one that’ll work with the space she had.” .

After running what they fancied to be a corner bar of coffee shops for four years, a Denver duo is twisting the concept for a second location in RiNo.