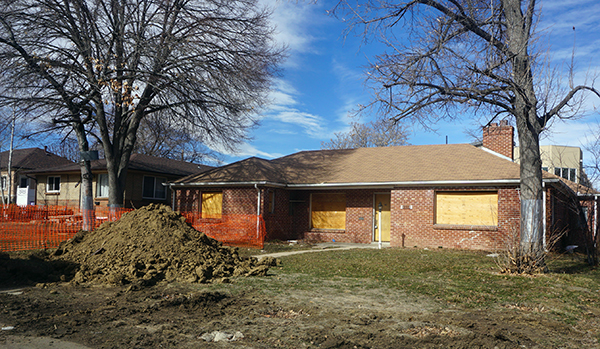 A home on 19th Avenue that will be demolished and replaced with townhomes. Photo by Burl Rolett.

Condos keep landing on the shores of Sloan’s Lake.

Jackson Design Build is planning 22 new townhomes in the neighborhood between three projects. At prices between $395,000 and $620,000, company head Dave Jackson expects two familiar types of Denver buyers, and a third that’s more specific to fast-changing neighborhoods such as Sloan’s Lake.

“We see young professionals who want to be close to Denver, single or married; empty nesters relocating to the city who want a no-maintenance, lock-and-go type residence,” Jackson said. “And then we also see people who already live in the neighborhood, and then we buy their house and demolish it, and they want to stay and need a place to live.”

The plan, Jackson said, is to get the 1625 King St. parcel through the city planning process, demo the site and sell it shovel-ready to another developer to build and sell the townhomes. He’s expecting to put that package on the market for sale in the second quarter of this year.

“The developers that are also working in the neighborhood are very much, like I am, looking for land,” Jackson said. “I don’t think we’ll have too much trouble finding a developer to pick it up and build it out.”

The 19th Avenue project will be the first to come out of the ground, with construction starting this month. Jackson bought that 0.2-acre site in May 2015 for $575,000, city records show. He said his total investment will come to about $2.8 million and sales should total about $3.3 million.

The six-unit row of townhomes will run between 1,100 and 2,200 square feet. Five of the homes will have three bedrooms and three-and-a-half bathrooms. The smallest townhome will have two bedrooms. All will stand three stories tall with rooftop decks.

Jackson said presales should start in the third quarter, with move-ins towards the end of 2016.

Jackson Design Build bought the King Street sites late last year, city records show, before splitting the land and deeding it to two separate LLCs – Jackson owns one and a private investor owns the other.

Jackson paid $1.65 million when he bought the entire 0.54-acre plot in November.

Plans for the two King Street projects are less solid at this point, but Jackson said they should be similar developments with townhomes between 1,100 and 1,400 square feet. Both will total eight units split between a pair of fourplexes.

Jackson said construction on the 1645 King St. plot, the one he is keeping, should start around fall. If construction runs on schedule, he said they would be move-in ready about a year later, with prices still to be determined.

Real Architecture is designing both the 19th Avenue and King Street projects. Jackson Design Build and 303 Development will be the general contractors. Jackson has yet to sign on a bank but is seeking a construction loan.

Jackson Design Build has operated in Denver since 2012. Before that, Dave Jackson launched Majestic Development in 1999. Jackson Design Build builds custom homes and handles small commercial projects as well. Jackson said he aims to have an ownership stake in half of his projects and do the other half on contract from other owners.

A home on 19th Avenue that will be demolished and replaced with townhomes. Photo by Burl Rolett.

Home builder will build/sell units at two sites, and prep a third parcel for another owner.

I would love to see some plans for these, If they look anything like the junk that has already gone up around Sloan Lake it would be very disappointing.
I fully recognize that developers have to make profits and that Denver as it grows can’t always get perfect plans. I just figure there are differences between absolute junk, and perfect plans. Walking around Sloan Lake today most of the historic homes are gone as are the once charming craftsman style houses.
They have been replaced with canyons of metal clad row-homes that clearly made no effort to fit in.
I would much prefer something architecturally more complex like the planned design for the new Legacy apartment complex on Speer and 14th then most of the recent development around the lake. https://businessden.com/2016/02/15/3-acres-on-speer-fetches-18-mil/#newsletter

BackyardXscapes offers a selection of full-round bamboo poles as well as half-rounds, and bamboo slats.