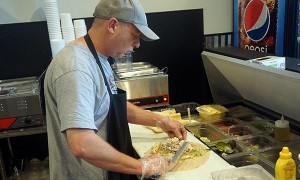 “I’ve wanted to put a store on Broadway for a while but I could never really find the best spot,” Kyle Fabra said. “I like this area of Broadway because of its proximity to Denver Health and a lot of businesses. It’s kind of an in-between spot for nightlife.”

The Broadway Fat Jack’s is the second the Fabras have opened in the last year after adding a Five Points Plaza location last summer. The chain’s menu features subs priced between $5 and $10.

Fabra spent about $200,000 opening the Broadway shop, he said, which is typical for a Fat Jack’s.

Fabra hired 15 employees to staff the store, including counter staff and delivery drivers. He anticipates deliveries will make up a significant portion of the Broadway store’s revenue.

He’ll also cater to the late-night weekend crowd by keeping the shop open until 3 a.m. on Thursday, Friday and Saturday nights.

The Fabras bought the Fat Jack’s brand in 2012 from brothers Jeff and Ryan Ward, who founded the chain in 2000, Kyle Fabra said. They’ve since doubled the size of the chain from three locations to six and struck an agreement with Paul Tamburello to sell pints of Little Man Ice Cream at all Fat Jack’s locations.

The company will close its Highlands shop at 2015 W. 32nd Ave. this summer, Fabra said.
“We just found out that building sold on our 32nd and Tejon location, so we’ll need to find a new home for that spot,” he said. “We have until July 11 on the lease.”

Trammell Crow Residential bought the 115-year-old Dickinson Plaza retail strip last month for $6.85 million, according to city records, and plans to develop the 0.8-acre lot into a five-story multi-use property.

Fat Jack’s Supersubs opened their sixth shop Wednesday at 450 Broadway, but the chain is having to close a spot in LoHi because the building was sold.