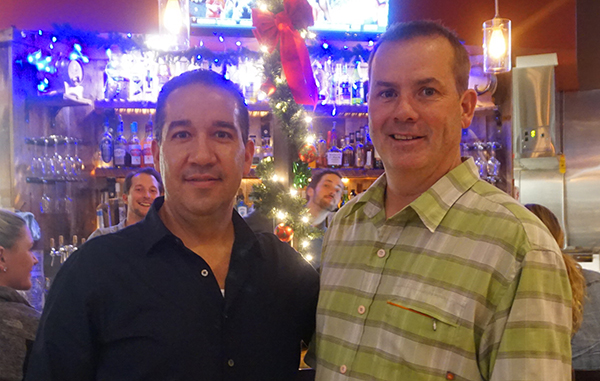 Gabriel Aragon (left) and Craig Jones are opening a new restaurant and winery in Littleton.

A Cap Hill classic is cooking up a $5 million project in Littleton – and bringing a new friend along for the adventure.

Craig Jones, one of the owners of Angelo’s Taverna, is teaming up with DTC chef Gabriel Aragon to open a dual-sided restaurant venue in Littleton.

The Littleton outpost will include a second Angelo’s Taverna location, as well as a new concept called Carboy Winery, when it opens at 6885 S. Santa Fe Drive next summer.

“It seemed like the right place – Littleton’s got a lot of growth going on, especially with that development going in off Broadway and Mineral,” Jones said. “We also wanted to open up an urban winery. We thought having an urban winery and an Angelo’s together would be a fun concept.”

The two restaurateurs will build a 10,000-square-foot facility from scratch, which will be split in half to house Angelo’s and Carboy. It’ll take about $4 million to build the facility, which the duo financed through private investors, Jones said.

They plan to use 3 of the 5 acres themselves and sell or lease the remainder to another business, they said. So far they’ve received calls but haven’t struck a deal.

The new Angelo’s will seat about 250 patrons once it’s completed, Jones said. The restaurant will feature a similar menu as the first Angelo’s location, including oysters and pasta.

“It’s not a chain, so you’ll see some things at either place that are different,” he said.

Carboy Winery, named after a glass vessel for wine similar to a growler, will seat 20 to 30. The winery will import grape juices from both foreign and domestic vineyards in 275-pound bladders, Aragon said. Then, they’ll blend the juices and ferment them to make their own wines.

“We’re taking that same template as the microbrewery,” Aragon said. “We’re building from the ground up, so we have an open template here.”

The winery will produce around 30,000 gallons of booze in its first year but will quickly increase its output, Aragon said.

Developing the project has been a new challenge, Jones said.

“We had it rezoned (the property) from residential to commercial in seven months,” Jones said. “Now we’re going through site developments and easements. We’re even bringing a new road in. We have to do everything a developer does – without a developer.”

Jones and Aragon had originally planned to skip the development headache by renting the 10,000-square-foot former Champp’s Americana location at 7301 Santa Fe Drive, but Chick-fil-A ended up taking the space in April.

Aragon, 41, has worked at DTC-based Venice Ristorante and Catering for the last eight years. He’s also the founder of Highlands restaurant Firenze a Tavola.

Jones, 45, originally hails from San Diego. He operated Outback Steakhouses in Iowa and Denver for 15 years before purchasing the 42-year-old Angelo’s – a pizza joint at the time – in 2013. After $800,000 of renovations, Jones reopened the restaurant with a different business partner as an oyster bar and Italian food joint.

Jones said Angelo’s on Sixth Avenue is on track to do $3 million in revenue.

Gabriel Aragon (left) and Craig Jones are opening a new restaurant and winery in Littleton.

Cap Hill's Angelo's Italian restaurant is getting a second location, and a new urban winery is in the works at a new Littleton project -- a joint venture between Angelo's owner and a DTC chef.

I hope this restaurant isn’t real noisy.
I love to come with friends to eat and enjoy talking to my friends .
Some restaurants are not enjoyable We can’t hear each other. thank you
Monica McKenna

-I GREW UP AT 6885 SANTA FE AND STILL HAVE THE ORIGINAL MAILBOX WITH THE MILLER NAME ON IT. ARE YOU INTERESTED IN SHOWING IT AS A DISPLAY AND A BIT OF HISTORY FOR YOUR ENDEAVOR? I WOULD HAPPILY GIVE IT TO YOU. LET ME KNOW.
INGE MILLER
303-978-9880 PS I LOVE YOUR FOOD. HAVE EATEN THERE SEVERAL TIMES.