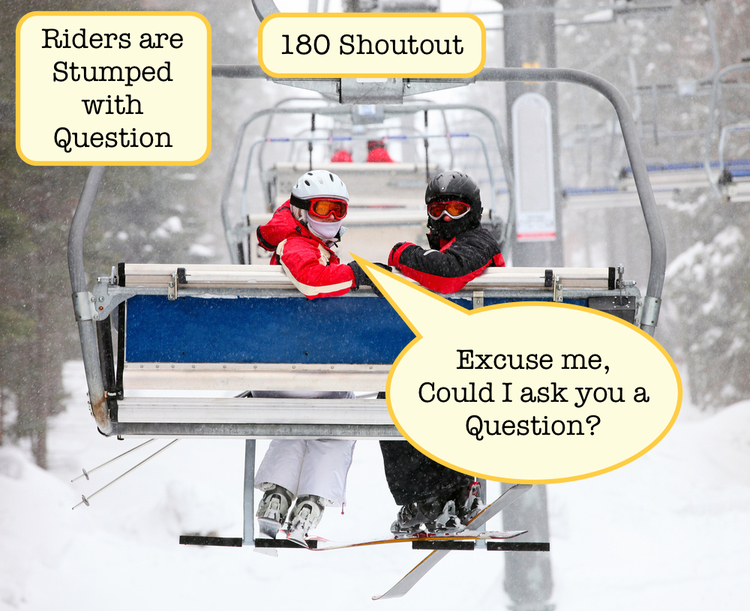 Trivia Lift contestants would be able to get emergency answer help from fellow skiers. Photo courtesy of Trivia Lift.

Question: Name one place you can ride a chairlift and win cash while playing trivia.

Virginia resident Kelly Robinson might have the answer. If his Kickstarer campaign hauls in $15,000, the trivia whiz will move back to Colorado from Richmond to film a pilot episode of “Trivia Lift,” a trivia TV show that will pose questions to Summit County skiers and snowboarders for cold, hard cash.

Robinson has amassed 700 trivia questions addressing topics from pop culture to sociology, including gems like “Peruvians consume 65 million of what a year?” (Answer: guinea pigs).

To fund the project, Robinson said he’s launching a 30-day Kickstarter campaign today to raise $15,000. He hopes to lure backers with unusual rewards. Anyone who donates $500 will receive tickets to Trivia Lift’s launch party, and anyone who shells out $1,500 gets to skydive into the party with Robinson. 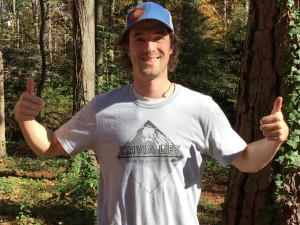 He’s also investing $5,000 of his own savings in the project, he said.

Robinson describes Trivia Lift as “Cash Cab” on a chairlift. He and a video team will jump up to three unsuspecting skiers as they catch a chairlift. The skiers answer questions until they reach the top of the mountain. As the chairlift gets higher, so does the payoff, which starts at $25 per question.

Robinson will host the show himself and receive information and questions from a team on the ground through an earpiece.

Filming will take place on a standard chairlift outfitted with cameras and microphones that film contestants and the surrounding mountain. Cameras mounted on a second chair in front of the contestants will film them, as well.

He has hired a team of eight to film the pilot, he said, including two former techs from “Cash Cab Canada,” audio engineer Paul Edwards and video editor Erdal Ali. 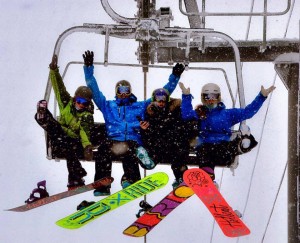 Robinson is hoping the show will be a hit in Summit County.

If everything runs according to schedule, Robinson will film the pilot episode during the second week of March. He said he’s in talks with Summit County ski areas to film three days’ worth of content for the pilot but hasn’t locked one in yet.

But filming the pilot is only half of the ride. Robinson still has to sell the pilot to a media outlet for distribution. Instead of traditional TV networks, he’s going to approach streaming sites like Hulu and Netflix.

“If you look at the streaming media market right now, there aren’t any game shows,” he said. “I’m looking at that niche and that audience.”

Robinson, a trivia guru who runs his own weekly trivia nights at Richmond’s Isley Brewery, was struck with the idea for the show last December when he was watching Cash Cab with his father.

“He looked over at me and said, ‘You know, they don’t make new episodes of this show,’” Robinson said. “I had the idea a while back of starting a YouTube channel to interview people on chairlifts called ‘Chairlift Chronicles.’ I basically combined ‘Chairlift Chronicles’ with ‘Cash Cab’ and it became ‘Trivia Lift.’”

Robinson, 29, currently lives in Richmond but plans to relocate to Denver if the Kickstarter is successful. He previously lived in Summit County and Longmont from 2009 through 2011, when he moved to Norway to be a whitewater rafting guide. He’s a graduate of Virginia’s Longwood University, where he studied molecular biology.

Trivia Lift contestants would be able to get emergency answer help from fellow skiers. Photo courtesy of Trivia Lift.

Where can you make money while riding a chairlift? A Virginia entrepreneur hopes he can provide the answer with a new game show he has in the works for Summit County.

Hey George great article! Anyone who is interested in Trivia Lift and helping the show can visit the Kickstarter page here:

*Just to clarify I do have a resort in Summit County we are filming at.

Thank you to everyone at Businessden.com !