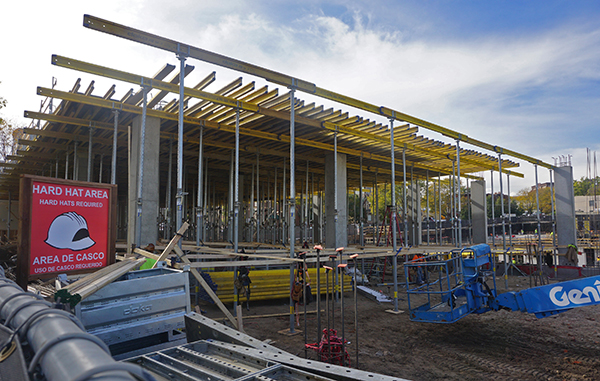 Construction is underway on a new apartment project in LoHi. Photo by Burl Rolett.

Comfort food spot Rusty Bucket Restaurant & Tavern is coming to 18th and Central streets. The restaurant will be the Rusty Bucket’s second Denver-area location and the first tenant at a 317-unit apartment complex developed by Southern Land Co.

“I like the LoHi area, it’s very up-and-coming and one of the hotter spots in Denver right now,” Rusty Bucket founder Gary Callicoat said. “It’s more of an urban family environment. And I like that it’s near downtown, Union Station and right off of the interstate.”

The Ohio-based restaurant chain has a 10-year lease for 5,250 square feet on the first floor of the apartment development. Callicoat said it will cost about $1.5 million to get the restaurant running. He said he hopes to be open near the end of 2016.

Callicoat said he finalized the lease about five months ago. He had previously looked at locations in Glendale but had a deal fall through in that area before locking in the LoHi space.

Callicoat opened the first Rusty Bucket location in 2002. He now has 19 locations in Ohio, Michigan, Indiana and Florida. Rusty Bucket has also leased space at Westminster’s Orchard Town Center and plans to open its first Colorado restaurant there in spring 2016.

Callicoat said he’s not stopping at just the Westminster and LoHi spots.

“Hopefully we would like to have five or six in the Denver market alone,” Callicoat said. “And that doesn’t include Fort Collins, Boulder or any of those areas.”

Callicoat said an Ohio-based architect is designing the space. The project has yet to go out to bid to contractors.

Tennessee-based Southern Land Co. hopes to finish its apartment building in fall of 2016.

The 18th and Central project is replacing the former Mile High United Way building in LoHi. Southern Land bought the 2.4-acre site from the United Way for $10 million and cleared the lot earlier this year.

The project has two other retail spaces measuring 1,450 square feet and 2,600 square feet.

Construction is underway on a new apartment project in LoHi. Photo by Burl Rolett.

An Ohio tavern concept with its first Colorado location in the works in Westminster has signed on to a new LoHi apartment development -- and that's just the first drop in the bucket.

The Rusty Bucket could not be more unsuited for LoHi. Its not only a shame but a HUGE miss that the folks at Southern Land didn’t do enough research to realize LoHi and Highlands in general host small business and VERY low impact concepts. The neighbors in LoHi are drawn to new and forward thinking concepts, locally owned and run. Not big,uninteresting, national chains serving uninspired bar food. What’s next? Olive Garden? Red Lobster?

What on earth makes Gary Callicoat think a place like the Rusty Bucket will fit into LoHi (Highland). He obviously has done very little market research of the neighborhood’s spirit and vibe. This is a shame and will only hurt our wonderful community!