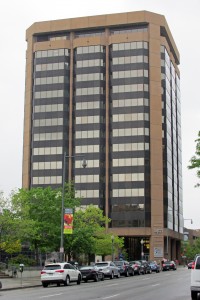 Plummeting oil prices have a 20,000-square-foot silver lining for one Denver energy firm.

Laramie Energy will sublease 19,600 square feet of the former Pioneer Natural Resources office at 1401 17th St. CBRE broker Greg Holm, who represented the tenant, said Laramie started calling about the space in May, immediately after Pioneer announced plans to close in Denver.

“We were fairly focused on another building, but once we saw that they were closing their office, we wanted to jump on it,” Holm said. “We thought it would probably be a good deal, and we wanted to get in front of other users that might be attracted to the space.”

Laramie currently has about 13,000 square feet at 1521 Larimer St. Holm said that lease is expiring, and Laramie will vacate that office to move over to 17th Street.

Laramie’s business is focused on finding gas in the Rockies from unconventional reserves, such as tight sands, coal beds and gas shales, according to the company’s website.

The sublease will fill about half of the former Pioneer office. Laramie will take the 14th floor and half of the 13th floor. Pioneer is still working on subleasing 20,400 square feet on the 13th and 12th floors.

Pioneer Natural Resources previously had five floors but scaled down to three about two years ago. In May, the Dallas-based firm announced it would close its Denver office. It laid off about 70 employees and put its 40,000-square-foot office up for sublease.

Pioneer negotiated a renewal on the Denver office and remodeled the space about six months before announcing the closure, Holm said. Laramie moves in this December.

Pioneer isn’t the only oil and natural gas company giving back Denver office space. Houston-based Linn Energy laid off 55 Denver workers earlier this year and put three floors of office space at 1999 Broadway on the market for sublease.

Holm said there is about 500,000 square feet of space up for sublease by energy companies. But with 26 million square feet of downtown office space, Holm said contracting energy firms aren’t taking too much power out of the leasing market.

“Sublease space is still relatively low, but oil and gas is the one sector that has had an event that results in more space coming on the market,” Holm said. “But there are companies in the energy sector that are growing, and Laramie is one of them.”

Pioneer’s lease – and Laramie’s sublease – runs through 2021. Holm declined to share lease rates, but said it was an attractive deal and came in below market rate.

Vector Property Services is marketing Pioneer’s sublease space. A leasing brochure on the company’s website lists an asking rate of $29 per square foot. The remaining full floor on the sublease measures 13,200 square feet and has 31 offices, a reception area and a pair of conference rooms.