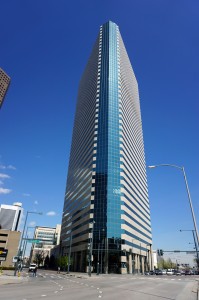 Linn Energy is leaving its office at 1999 Broadway. Photo by George Demopoulos.

Houston-based Linn Energy filed a WARN notice with the Colorado Department of Labor and Employment that it would close its Denver office by June 15 and eliminate 55 jobs.

Linn leases three floors downtown at 1999 Broadway, according to Linn Spokesman Clay Jeansonne, who also said that the company is actively subleasing the space.

Linn said in the notice that the closing was expected to be permanent.

Linn increased drilling operations in the Rockies through acquisitions over the last few years, including in northwest Colorado, Utah, Wyoming and Montana.

Linn Energy is leaving its office at 1999 Broadway. Photo by George Demopoulos.

The fallout of dropping oil prices is hitting Denver's downtown, where a Texas energy firm will shutter its office and cut more than 50 jobs.