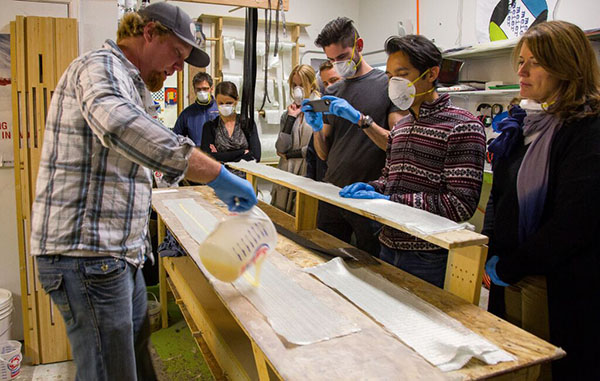 Maybe snowboarders aren’t so bad after all.

After five years of producing skis, Carbondale ski maker Meier Skis will release its first line of snowboards this winter.

Eynon said Meier will manufacture a run of 100 to 150 snowboards for the 2015-2016 season, comprising about 15 percent of the company’s total production.

Boards will be available in one shape and two lengths, 154 and 161 centimeters, when they’re released in a few months. The wood-core boards’ camber is inspired by a Corsair airplane’s wings – Cudmore is also an avid aviator – intended to tackle resort or backcountry riding.

“The wood core will provide a lightness and poppiness that you won’t find elsewhere,” Eynon said.
They’ll retail for about $500 and initially only be available on Meier’s website. The company makes all its products at its Carbondale facility.

Building snowboards won’t require any significant equipment upgrade at the factory, Eynon said.
“There’s not a whole lot that’s different in the tooling,” he said. “There are a couple small tweaks we have to make, but for the most part the process is very similar.”

Cudmore, a 35-year-old former CAD designer, founded Meier in his garage in 2009. He partnered with former software developer Eynon, 52, in 2012. That year, the pair moved production from Cudmore’s garage into The Factory, the company’s current 3,000-square-foot facility in Carbondale.

“We decided we could increase our volume which in turn helps us with cost of materials,” Eynon said. “We can also split overhead. We think it makes more financial sense to go at it together out of The Factory rather than going it alone.”

The company isn’t profitable yet. Eynon said he thinks Meier can carve out a profit by 2017.

Meier would like to add a warehouse in Denver, Eynon said, but the company is waiting until it can find a centralized location with factory space and a showroom.

“We want a place where people can see the brand, take a tour, learn about the skis and how we make them, and hang out and have a beer with us,” he said.