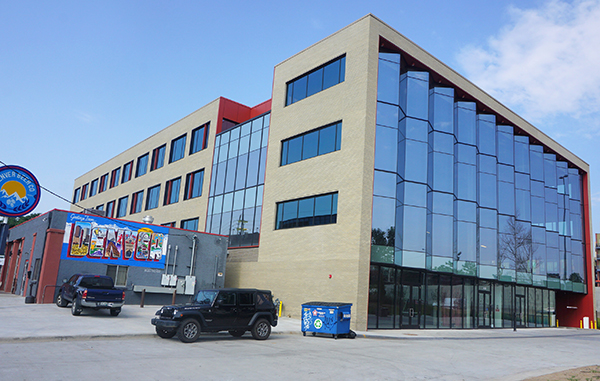 Co-working titan WeWork has gobbled up another 50,000 square feet of downtown office space.

The New York-based company leased 65 percent of the 78,000-square-foot Lab on Platte building, the property’s owner Soma Capital Partners announced. It’s at least the second WeWork location in Denver and the third lease Soma has worked with WeWork.

“We’ve been looking in Denver for almost a year as a market we wanted to be in,” Soma partner Jordan Caspari said. “Given the relationship with WeWork, we were looking to find the right product for them, and that was really the driver in the deal.”

Soma, with backing from Philadelphia-based CenterSquare Investment Management, bought the Lab on Platte earlier this month from building developers Brue Capital and Confluent Development. WeWork signed its lease in June, according to a Soma press release, and will move in by the end of the year. 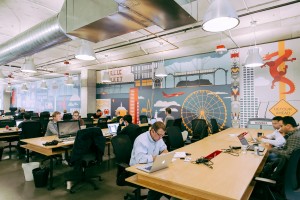 WeWork has offices across the world, including one in Seattle (pictured). Photo by WeWork.

The Lab deal will give WeWork more than 120,000 square feet downtown. The first Denver WeWork will take up three floors at the Triangle Building. A company real estate report dated May 21 said WeWork was eyeing another 30,000-square-foot space at 16M at Market and 16th streets.

The Lab is a four-story office building between the Denver Beer Co. and Interstate 25 at 2420 17th St. About 25,000 square feet remain unleased on the building’s second floor, and the development has 3,000 square feet of ground-floor retail space. CBRE is marketing the office space, and Urban Legend is handling the retail stalls.

WeWork rents out common area memberships, dedicated desks and small offices. The company website lists locations in 12 U.S. cities, Israel, the United Kingdom and the Netherlands. At the Austin, Texas, WeWork, rates start at $45 a month for common space access and climb to $600 for small offices.

WeWork is moving into a crowded Denver co-working market. There are at least 17 co-working locations open or in the works between downtown, River North, the Highlands and Cherry Creek. Shared office brand Galvanize opened Galvanize 2.0 this summer just across Platte Street from the Lab.

But the company is coming in with deep pockets. WeWork announced in June it had raised $400 million at a $10 billion valuation. In December 2014, WeWork closed out a $355 million round of funding at a $5 billion valuation.

The New York co-working giant has grabbed space in a new Platte Street project, pushing its downtown space to about 120,000 square feet between two buildings.