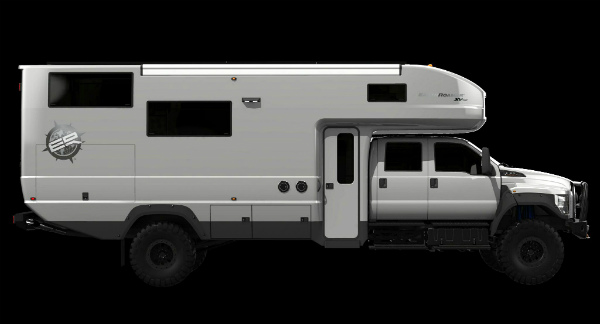 A rendering of the newest EarthRoamer model.

For customers with serious coin, a Colorado RV builder is designing a new model that’s even bigger and badder for a week off the grid.

EarthRoamer is finishing up the designs on the XV-HD, which is 8 feet longer than the firm’s other stock models. And the company is expanding its production warehouse  north of Denver by 7,000 square feet.

Roughing it this is not: EarthRoamer makes beefy rigs with creature comforts such as flat-panel TVs and premium sound systems. Those are the kind of finishes you get for a cost of around $1 million per vehicle. You also get military-grade tires and an air-suspension system that can lower or raise each wheel.

“We’ve wanted to do it for years but haven’t had the resources until now,” said founder and CEO Bill Swails of his latest design. “It enables a different style of camping. We build it with a garage in the back so you can bring ATVs and motorcycles. Basically you set up a base camp and play with the toys.”

EarthRoamer has one order for the vehicle, Swails said. 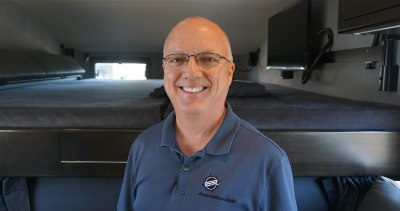 The base model will cost between $925,000 and $975,000. Because each vehicle is built to order, prices can run even higher. For example, EarthRoamer will install a WiFi hotspot on a vehicle (in case you need to watch YouTube videos 500 miles away from civilization) for $15,000.

“We have a fair number of professional couples who retired early and want to get out there and explore,” Swails said. “Instead of a beach house or a mountain house, they get an EarthRoamer.”

The HD is a larger, souped-up version of EarthRoamer’s XV-LT. The company has sold about 150 of those vehicles since 2003. A few years later, Swails designed a longer version of the LT.

“It ended up becoming about 90 percent of our sales,” Swails. “It was clear that people wanted something bigger.”

He came up with the HD’s concept a few years ago and started designing the vehicle late last year. He’s finalizing the camper’s body design, which he expects to finish this fall.

The company won’t abandon the time-tested LT yet, but Swails said the HD has the potential to pave the way into a new market.

“I think that long-term, the HD could produce even more revenue (than the LT),” he said. “Many manufacturers already make motor homes the same size as the HD. We’re coming into a market segment that’s already established.”

EarthRoamer operates out of a 15,000-square-foot facility in Dacono, about 30 minutes north of Denver along I-25. The firm is leasing warehouse space adjacent to its current location and will expand its production facility to 22,000 square feet by March.

The company employs 20 people in its production line, and another 10 in its office.

The business of high-end RVs hasn’t been without its speed bumps. EarthRoamer declared bankruptcy in 2009 when the economy crashed. That was months after Swails signed a mortgage on a $5 million facility in Broomfield in February 2008.

“We went from selling 28 trucks in one year to zero the year after that,” he said. “As we saw things starting to decline, we got to the point where there was no way to compensate.”

With potential investors hanging onto their money tightly, Swails had to get creative to keep EarthRoamer rolling. He shifted the company’s focus from producing XVs to maintaining and upgrading existing vehicles. He pre-sold service plans, priced between $3,000 and $10,000.

“We came up with a really good upgrade around that time,” Swails said. “We added air-ride suspension and military grade tires. That made it an attractive service plan.”

He raised enough capital to get the company back on its feet and by 2010, EarthRoamer was building RVs again. In the last few years, the company has built a dozen vehicles per year.

Swails founded EarthRoamer in 2002, after a trip to Alaska in 1999 in a traditional RV left him craving a more durable vehicle.

“I spent way too many days in a Home Depot in Anchorage trying to patch the thing together,” he said. “I realized after a while that you can’t take something that’s not designed to be used off road and patch it together to do that. So I did a ground-up redesign on that trip.”

He started the company with about $500,000, secured through, in his own words, “maxing out every credit card we had, selling my condo, and moving into a friend’s basement.”

“I love the lifestyle but hate and despise the camper,” he said. “I didn’t want to start a major manufacturing business but it’s the only way I could do it right.”

A rendering of the newest EarthRoamer model.

For customers with serious coin, a Colorado RV builder is designing a new model that’s even bigger and badder for a week off the grid. And to help produce beefy rigs, the firm is also adding 7,000 square feet to its production facility.

I think theses RV’s are off the charts cool!

I want to get one of them as soon as I am financially able.

What a great idea!

Oh to have one of these would be a dream come true! Someday! Keeping the dream alive!